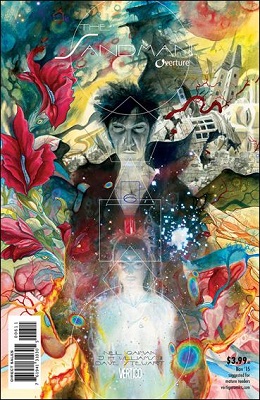 Rating: 5/5 – In Which Dream Saves the Universe and Learns the True Meaning of Hope.
by ComicSpectrum EiC Bob Bretall

I reviewed the 1st issue of this series a month shy of 2 years ago, in early November 2013.  When it became clear that this would be very slow in coming out, I turned the single issues into a “virtual collected edition”, letting them stack up on my to read pile to be read in a single sitting once #6 came out, which happened 2 weeks ago on Sept 30, 2015.  I’m glad I did it that way.  Neil Gaiman has created a dense story with a lot of nuance, BUT very accessible, at least for me.  I say that as a point of comparison because I have read some comics that I would describe as “dense and seeming to require a dedicated course of study to understand what the heck is going on”.  Having read the previous Sandman material I seemed to be able to follow along quite nicely while appreciating all the gems of storytelling Gaiman and artist JH Williams II built into this issue and this series.

Over the course of this series, we meet the parents of The Endless.  Parents!  I never thought of them as having parents but Gaiman made it seem so obvious as he wove them into the fabric of the story.  Every character introduced had a place and in the end the entire story dovetails into the beginning of the original Sandman epic…though I’d not recommend reading this as your first foray into the annals of The Endless.

I’ll be surprised if this series is not nominated (and wins) several awards for both story and art.  JH Williams III’s art was absolutely stunning.  His sense of design is such an integral part of the storytelling process.  His page layouts are a visual feast that I kept stepping back from to admire as works of art in and of themselves; something I rarely do when reading a comic.

Taking Sandman: Overture #6 as a standalone, there were so many moments of both story and art that took my breath away, giving the book just a 5/5 seems somehow inadequate.  This issue and this series is as close to my personal definition of comic book perfection as it gets.  I was a bit reserved (just a bit…it got a 4.5) with my rating of the 1st issue.  The problem I have had with a number of series in the past is that they start strong for me, but then either falter in the middle or fail to ‘stick the landing’.  Sandman: Overture excelled in each and every installment, as a whole, and the ending was brilliant.  I’m not sure who I’m really preaching to here, because anyone who is a Sandman fan has got to be on board with this, although some may be waiting for the collected edition.  It has definitely been worth the wait and will, I have confidence, please Sandman fans who have been patiently (or not so patiently) waiting for it.  This gets my highest possible recommendation.

The goal of ComicSpectrum is to provide a one-stop reference for everything about & related to comics and comics culture.
View all posts by comicspectrum →
This entry was posted in DC, Vertigo and tagged comics, DC Comics, JH Williams III, Neil Gaiman, Sandman, Sandman Overture, Vertigo. Bookmark the permalink.