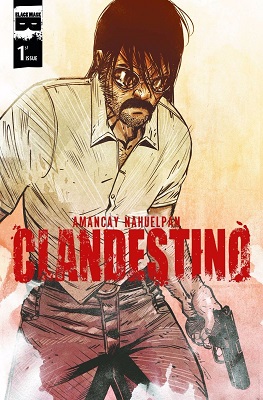 Rating: 3/5 – Welcome to the Revolution!
by ComicSpectrum EiC Bob Bretall.

Black Mask has been putting out some really different comics and is certainly a Publisher that bears watching.  Clandestino is their latest offering, focusing on the aftermath of a coup d’etat in the fictional country of Tairona which spawns the requisite rebellion forces.  Writer/artist Amancay Nahuelpan does an outstanding job on the art, but his story had some logic and story flow issues that were problems for me as I was reading this debut issue.

We seem to be focusing on multiple time-frames in the book that just don’t mesh in my head as being the right amount of time apart.  The coup itself happens in 1973.  We see a kid of maybe 5 or 6 who theoretically grows up to to be our protagonist.  There are also scenes taking place at the 22nd anniversary of the coup, which would make it 1995.  In the context of this 1995 time-frame we get a reference to an “in world” ad that refers to Facebook and Twitter, which didn’t exist in 1995.  We also have scenes set in “present day” which is 42 years post-coup, and the protagonist doesn’t look like he’s old enough (47 or so?) to have been that kid from the coup, though he could have been that kid grown up to 1995.  A lot of people will probably read this and sail right on past the dates without worrying about it, but these are the kinds of inconsistencies that take me out of the story.

The jumps between the multiple time-frames caused a less than optimal reading experience for me.  This issue  is best enjoyed as an action/revenge story without paying too close of attention to the facts of the framework the story is hung upon.  If you can let the art and basic plot carry you along and forgive the plot/consistency holes this will be a much smoother ride.  Nahuelpan has been working on this for 7 years and has 6 issues completed, so this first issue we’re looking at really came out of a time capsule.  I really admire the art here and am very interested to see how Nahuelpan’s art is going to evolve over the 7 years  of elapsed time between this issue and issue #6.  Hopefully his plotting/storytelling will similarly grow and get tighter.  I’m going to give this a try because I liked what I saw enough and the idea of seeing a fast-forward of creative development of the next several issues intrigues me.

The goal of ComicSpectrum is to provide a one-stop reference for everything about & related to comics and comics culture.
View all posts by comicspectrum →
This entry was posted in Black Mask and tagged Amancay Nahuelpan, Black Mask, Clandestino, comics, Revolution. Bookmark the permalink.