Posted on November 24, 2015 by comicspectrum 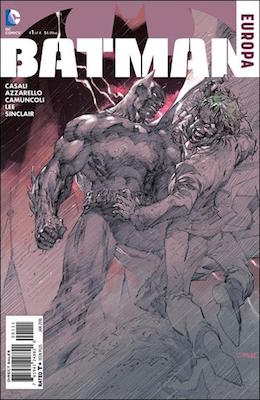 It was way back in 2004 that Batman: Europa was announced! I actually remember this being announced at the time, and seeing Jim Lee’s artwork being solicited on the character again was exciting. It wasn’t too long after the mega-popular Hush storyline by Loeb and Lee had wrapped up, and the promise of more Jim Lee Batman would be gladly welcomed. Since then, European artists such as Matteo Casali, Giuseppe Camuncoli and Jim Lee will handle this four issue series that sees Batman teaming up with the Joker searching for the cure to a virus called Colossus that they’ve both been infected with.

To me, this comic was definitely not worth the wait. Not only is the premise of Batman and Joker teaming up for anything, even for an extreme situation such as this, tough to believe, but the art didn’t appeal to me with its lack of an inker and colors that although purposefully messy in order to give it more of a painted style, looks just that…messy. Artist Giuseppe Camuncoli provides all the layouts which showcase some great poses and panels, but Lee’s pencils on top of those layouts don’t add to them to make a more appealing complete package.

Not only that, even the structure of the book seemed off to me. It has a $4.99 price tag and although it does have extra pages, when you get to the end, it then has ten straight pages of ads. I was expecting some behind the scenes material or some stories describing the delay when nearing the end and noticing plenty more pages to go, but the ads kept coming. I guess I prefer the ads not disrupting the story, but it still threw me off and made me second guess the page count.

The story will travel across Europe over the course of these four issues with Brian Azzarello writing and other artists lined up for the remaining three issues. Because of my lack of love for this first issue, I don’t think I’ll be back for the rest of this series. I was so excited to see it re-solicited and finally making its way into our hands, but I expected more after waiting 10 years. If you’re a fan of anything  Jim Lee or Batman, you’ll still most likely be giving this a try, just be aware that it may not be either of the two that you’re used to.

The goal of ComicSpectrum is to provide a one-stop reference for everything about & related to comics and comics culture.
View all posts by comicspectrum →
This entry was posted in DC and tagged Batman, Batman: Europa, Brian Azzarello, comic books, comics, DC Comics, Giuseppe Camuncoli, Jim Lee, Joker. Bookmark the permalink.