Posted on February 21, 2016 by comicspectrum 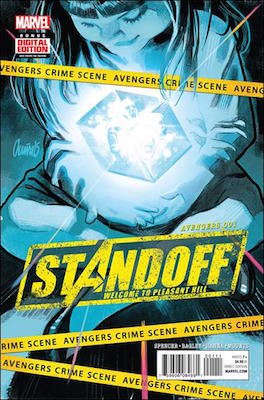 Since Secret Wars has ended, I feel as though I’m a bit behind on many of Marvel’s mainstream titles. I was trying to wait as long as possible with the ending of Secret Wars to dive into all of the new post Secret Wars titles. Looking back on that now it wasn’t the best of decisions, but it did allow me to catch up on plenty of the other books I’ve been falling behind on, and of course diving into my seemingly endless amount of “not read yet” back issues. I say all of this because I really wasn’t sure just what Avengers Standoff: Welcome to Pleasant Hill was going to be about. I knew it had ties to the upcoming Civil War II event, which seems as though it’s coming too fast, but that’s about it. After reading this, I’m more intrigued than I originally was.

I’m glad I didn’t know too much about this in advance, this issue surprised me with both it’s approach and its “I didn’t see that coming” ending. One of the books I have followed in the post Secret Wars Marvel is Captain America and I’m glad I’ve followed it, since some of those themes introduced in the first couple of issues carry over into some of the larger themes presented in this one-shot. Writer Nick Spencer opens up the book with a recap page that shows how S.H.I.E.L.D. have been overstepping their authority, and we see that happen in both clear and subtle ways throughout this issue. I don’t want to spoil too much since having little knowledge heading into this increased my enjoyment, but the story is similar to the 1960s TV show The Prisoner, with a Marvel twist of course.

The art by Mark Bagley is solid in its storytelling and does a nice job of keeping it exciting despite the majority of the issue being light on super heroics and costumes. Bagley’s tenure with super hero comics shows just how easy he makes a story like this look. I’m not the biggest of Bagley fans, but he’s such a solid go-to artist and I appreciate his abilities to tell a clear story with emotion and heart. Avengers Standoff has me interested in what’s ahead with Marvels’ next event, even though that event feels like it’s coming on way too soon.

The goal of ComicSpectrum is to provide a one-stop reference for everything about & related to comics and comics culture.
View all posts by comicspectrum →
This entry was posted in Marvel and tagged Avengers, Avengers Standoff: Welcome to Pleasant Hill, Civil War, comic books, comics, Mark Bagley, Marvel, Nick Spencer, S.H.I.E.L.D.. Bookmark the permalink.