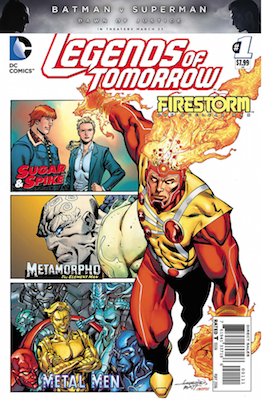 After talking with a certain someone about DC’s Legends of Tomorrow TV show, I was told that it’s not as good as CW’s other two shows, Flash and Arrow. Despite my being behind a bit, I do plan on catching up eventually, but meanwhile, DC has released a Legends of Tomorrow anthology starring a different cast of characters, with the exception of Firestorm, from those seen on TV. Priced at an expensive $7.99, Legends of Tomorrow number one tells four different stories that will continue on in subsequent issues. The four stories star Firestorm, Metamorpho, the Metal Men, and surprisingly Sugar and Spike, each by a different creative team and each at a solid twenty pages in length.

Firestorm was the first story, but probably my least favorite of the bunch. Written by Gerry Conway with art by Eduardo Pansica, Firestorm is dealing with the struggle of having two personalities while at the same time in the background, Multiplex is up to something that will complicate Firestorm’s life even further. I appreciated the fact that Conway didn’t feel the need to retell an origin story and got right to the action, but the writing and danger never hooked me to want to see more.

Metamorpho’s story on the other hand does have me wanting to read more as writer and artist Aaron Lopresti did a great job of including Metamorpho’s origin as well as telling a solid story with some great art. Metamorpho is being held by long-time evil DC business man Simon Stagg. As Metamorpho tries to escape, his body is contorting into all different shapes and materials and Lopresti makes it look cool and slightly gross. There’s even a small appearance by a classic Justice League of America villain who looks as though he’ll play a larger role in the next issue. I loved seeing this character again!

My favorite story of the book was Sugar and Spike. I’ve never read a story about these characters so this was a pleasant surprise. All I knew about the two was they were part of a humor series featuring them as toddlers in the late 1950s through the 1960s. Here they’re all grown up and are private investigators with metahumans as a specialty. Not only was I unfamiliar with the characters, but also unfamiliar with artist Bilquis Evely’s work. I loved it and thought it was the best art of the book. Evely can tell a story in her inconsistent panel layout and the colors by Ivan Plascencia do a wonderful job of balancing the darks. I’m so glad that writer Keith Giffen has resurrected these characters, even if they’re so different from their original interpretation. I know it can be argued that they stray too far from the originals, but to see them being used again makes me happy.

Finally, The Metal Men round out the issue. I’ll take the Metal Men however I can get them since their appearances in the New 52 DC has been limited to say the least. Len Wein continues to write more at DC and tells a pretty entertaining story with the Metal Men and Doctor Will Magnus taking on a group of robotic missile men. As corny as that sounds, it works. It’s also great to see Yildiray Cinar’s art, especially a full splash page of the team that has Platinum exclaiming “the Metal Men are Back!’, even if it’s just for a short while before DC’s Rebirth.

Although $7.99 is a lot to ask of a consumer to spend for stories about B, C and with Sugar and Spike D-List characters, longtime DC fans may want to give this one a shot. At 80 pages of story, they are giving a lot of content for the cover price, too.  I’ll be back for the rest of this series and feel as though I got my moneys worth.

The goal of ComicSpectrum is to provide a one-stop reference for everything about & related to comics and comics culture.
View all posts by comicspectrum →
This entry was posted in DC and tagged Aaron Lopresti, Bilquis Evely, comic books, comics, DC Comics, Firestorm, Keith Giffen, Legends of Tomorrow, Len Wein Yildiray Cinar, Metal Men, Metamorpho, Sugar and Spike. Bookmark the permalink.