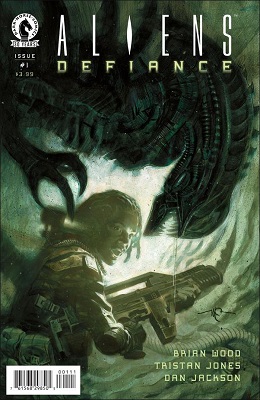 Alien Day was on Tuesday the 26th, so I found it only proper to purchase one of the Aliens comics, and what better title than the recently released “Aliens: Defiance”. I’m an Alien franchise fan, I own all the movies and several figures, but I am not one to typically dive into the comics, at least not since I was much younger. Since my local comic shop had this on the shelf, I took a shot at it.

The comic starts out like most of the movies; military and/or hibernation chambers. These are not the characters I know, and about a couple pages in I couldn’t help but think, “Someone is doing this right.” Typically it’s the same situation, abandoned ship or colony, then an Alien (Xenomorph) attacks, everyone dies except one person, a robot (Synthetic) is on the team and either kills everyone or is programmed to keep the Aliens alive for the Weyland Corporation. This was a little different, and I’m happy about that. The entire task force is Synthetics, except one person. According to the characters in the story, the task force was made of synthetics to bring an abandoned ship infested with Xenomorphs to Earth.

Writer Brian Wood brings a fresh and well written story to the Aliens franchise, but it’s still an Alien survival comic. Wood brings some rationality to his story and it’s well thought out. Weyland wants a Xenomorph so they can weaponize it, but that never seems to work out in their favor. The lead human hero is a fresh face, but devoted fans will be happy to see a Ripley cameo in the beginning of the comic. Artist Tristan Jones and Colorist Dan Jackson bring back old memories with their style of art and color. I felt as if I was picking up a comic from when I was a kid. The art feels very retro and though some people may not enjoy this, it brought good vibes to me and my history with the comics from years ago.

The comic seems fresh on first look, but in the end it was still the same Aliens story being reused over and again. An infestation breaks out and people have to fight for their lives. But it is what it is, and devoted Alien fans should check it out for something a little different and judge for themselves if it’s worth following the series.  Those bored with seeing Aliens attack and kill continuously may want to steer clear. For my own part, I probably won’t be going forward to read more as I fall into the second group.

The goal of ComicSpectrum is to provide a one-stop reference for everything about & related to comics and comics culture.
View all posts by comicspectrum →
This entry was posted in Dark Horse and tagged aliens, Aliens: Defiance, Brian Wood, comics, Dark Horse. Bookmark the permalink.