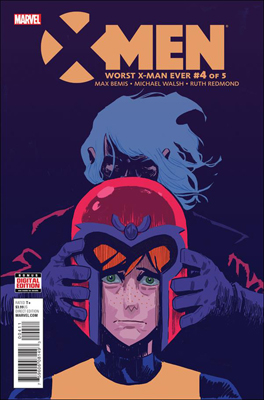 Rating: 3.5/5 – Not Really the Worst X-Man Ever.
by ComicSpectrum reviewer Adam Brunell

I was looking for something a little different to read, so I grabbed X-Men: Worst X-Man Ever. I follow most of the X-Men titles, so I figured I would go for this title. It came across to me like it was a joke of a comic, just something extra to read on the side. The dialogue seems very playful, but the story feels a little down and out. For some reason the main character the story revolves around goes through some of the worst situations you can think of when becoming an X-Man.  Each issue brings in something different into the ordinary life of a mutant teenager with a not so special ability. We follow the main character, Bailey Hoskins, who appears to have the light shining on him as the worst X-Man ever. Bailey goes from typical ignored teenage boy in school, to typical ignored mutant teenager at the Xavier institute. Bailey has one mutant power and that is to blow up on command, but that’s it, and afterwards he dies. He gets one big boom and he’s done, no more Bailey. The X-Men try and figure out how to get Bailey involved, and it never ends well for the institute or Bailey.

In issue #4, writer Max Bemis has Bailey brought in front of the Brotherhood of Evil Mutants and offered a deal to change sides. At the end of the issue I’m left wondering how a major player of the X-Men appears to have been killed. We’re told who did the killing, but nothing else is really given away. This entire comic series is like this, something bad or good happens, but no real explanation as to why. If there is an explanation it’s rather mediocre, left with some dialogue that feels like it was just thrown together to make sense of everything.

One of Bailey’s only friends is Miranda, who has the ability to alter reality. Though Miranda is so powerful, she is put on the bench with Bailey because her abilities are considered a liability. The rest of the comic is the typical emotional roller-coaster Bailey has to deal with while being an X-Man. While reading this comic I have to say that Bailey is losing the spotlight of being considered the worst X-Man ever. Bailey may have a pretty bad mutant power, but as a person he’s actually a good kid. He’s always trying to help even when he’s told to stay out of the way or could possibly be killed, he’s good with people and he’s dedicated to the Xavier cause but keeps getting the short end of the stick through this entire series. I was convinced by the second issue that this comic is more of a light hearted joke than anything else. The series appears to take place on the 90’s X-Men team, it’s hard to pinpoint the exact time, but Gambit is in his 90’s costume and part of the team, so it has to be the 90’s right? Magneto doesn’t appear to be similar to his 90’s character, and Mystique is completely out of the 90’s timeline, so it’s probably another alternate universe. With the mass confusion of trying to piece together the time this takes place, I found myself disliking some of the X-Men characters I typically have enjoyed. Bailey’s perspective of the X-Men is that of the ignorant popular kids in high school, even Wolverine comes across like an  arrogant overworked middle school teacher.

If you’re looking for your typical X-Men comic, this isn’t it. If you want to read something with new and old X-Men characters, then it’s a decent read. The final issue is coming, and I’ve been reading this series since it first came out because for some weird reason I want to see what happens to Bailey. I feel bad for this kid in his world I can’t help but want to see what happens to him in the end. Regardless of what happens when the next issue is released, Bailey is not the worst X-Man ever, and it’s probably good that this comic is so short lived.

The goal of ComicSpectrum is to provide a one-stop reference for everything about & related to comics and comics culture.
View all posts by comicspectrum →
This entry was posted in Marvel and tagged Marvel, Max Bemis, Worst X-Man Ever, X-Men. Bookmark the permalink.