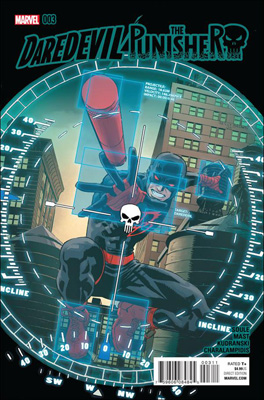 One of the things I love in a comic is detail, I want my heroes to be mortal and the story to show how fragile some of these heroes or villains can really be. Nobody is perfect, even the most athletic and agile heroes can still be just normal human beings with flaws. I like those flaws in my heroes; it makes them a little more believable. When it comes to The Punisher and Daredevil, they are extremely flawed. Daredevil may have his amazing senses and The Punisher may have his fighting skills, but they are both still mortal humans. You can see this in the recent TV show on Netflix, and as a fan of the show, this recent series feels more like the show than other comics with these characters I’ve read.

Writer Charles Soule really brings these characters to life; Blindspot, Daredevil and Punisher are all flawed mortals and Soule lets that be known. We are now on issue 3, in the last issue we had seen Daredevil lose his radar sense by being hit hard on the head. The Punisher gets tired out and is hanging from the side of a building, he’s unable to pull himself up to safety and the only way to survive is to analyze. Analyzing everything is how these heroes are able to survive. Daredevil accesses a situation based on time and sound, The Punisher is able to do the same thing and that’s what makes them formidable foes but also to respect each other. Both have a different moral standing, Frank Castle feels he’s above the law or that the law is corrupt and criminals need to be put down instead of locked up. Daredevil believes in the law and justice, people should answer for their crimes but at the hands of the law and not killed at will. Their most recent target is a Russian mobster that has murdered a lot of people and The Punisher cannot let that slide. This is one big game of cat and mouse, but the mouse has lots of money and big guns. Daredevil and Blindspot are escorting criminal to jail, but The Punisher has other plans. This recent issue brings in a foe in a suit of armor; Daredevil is still keeping his morals intact regardless of almost being killed several times by the mobster. The Punisher on the other hand is always able to track them down, and though Daredevil stands in his way, The Punisher is not about to kill his longtime brother in arms. It’s a race to the finish line, anyone can win this game and I’m glad to see The Punisher coming out as intelligent, tactical, and resourceful as ever.

Hell’s Kitchen is not a playground, it’s dark and grim. Artist Szymon Kudranski delivers the goods in this series, whether the scene is being observed by Daredevils senses or we are going panel to panel in “normal view”, it feels like you’re watching the action unfold like on screen . Kudranski’s style is bleak and dark, but that’s life in Hell’s Kitchen, that’s the way things are for The Punisher and Daredevil. Fighting scenes are chaotic, almost like you are getting a view from a dark alley. Kudranski brings the intensity of jumping onto a moving subway train, or the devastation of bullets flying through wooden doors. It’s detail, pure detail to the environment and flawed heroes.

I picked up the first issue of the Punisher title released this year, and this story makes Frank Castle more human and almost rational. I wasn’t going to pick this series up; I don’t typically follow Daredevil or The Punisher, at least not since the 1990’s. I grabbed the first issue for this series along with the first Punisher issue, thinking it may give a different approach, and it did. I’ve been into this series just as much as I have been with the Daredevil show, and with good reason.  This successfully drew me into the comic as a fan of the TV show.

The goal of ComicSpectrum is to provide a one-stop reference for everything about & related to comics and comics culture.
View all posts by comicspectrum →
This entry was posted in Marvel and tagged Blindspot, Charles Soule, comics, Daredevil, Hell's Kitchen, Punisher, Szymon Kudranski. Bookmark the permalink.