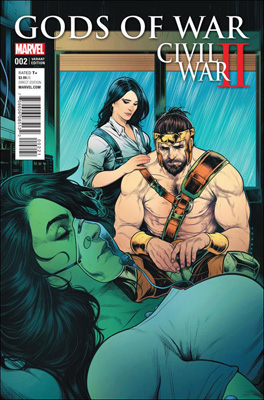 Rating: 3.5/5 – Gods of War or Gods of Drama?
by ComicSpectrum reviewer Adam Brunell

So I’ve grabbed a couple of the side comics for Marvel’s Civil War II event. I got issue 1 of the Gods of War title when it was released, it seemed fairly decent, but I was undecided after 1 issue if it was worth going the distance, so I got #2. There are several Marvel comics out right now that revolve around the Civil War II event, some seem more suited to the core Civil War concept, and some not so much. After reading the recent release of Gods of War, I feel like it’s just another filler.

I haven’t gotten into a Hercules title since 2008-2009. World War Hulk, Aftersmash and Secret Invasion were some of the titles I was really into back then, but I drifted away. Being called “Gods of War” I figured this title would incorporate some other major name gods like Thor or Ares, but that hasn’t been the case yet. When I grabbed the first issue and thought it would be another great Hercules title similar to what I had read prior, I slowly started realizing that it wasn’t. I shared my criticism with a fellow comic enthusiast, because I figured I was just being cynical. It was pointed out to me that this story seems to flow from the previous Hercules series, so it’s more about Hercules and the supporting characters from that series as opposed to Marvel Gods I was familiar with. The title led me astray a bit, and though it’s in the Marvel Universe during the Civil War conflict, Hercules is not included in any of the other Civil War stuff I’ve been reading. Hercules is going after his own problem, which only he and his other godlike buddies can see. Everyone else in the Marvel Universe thinks Hercules is just acting crazy and destructive, no major heroes seem to trust or want Hercules to assist with any of the major issues anymore. Poor Hercules has been cast aside, being considered just as destructive as Hulk at times. Writer Dan Abnett is tackling the Gods of War title, but it reads like something out of a TV drama as opposed to being more “war of the Gods” oriented.  I was expecting more action out of a title that called Gods and War. The comic carries on through the first 2 issues with little fighting and more old godlike acquaintances having dramatic conversations with heavy criticism of each other. By the end of this issue, Hercules is raging out and it appears to be getting interesting, but I’m left wondering if the entire second issue was just Hercules being controlled and still seeing things that no one else can. I’m left with little curiosity and desire to go forward in this series since it feels like I’m reading a soup opera.

Artist Emilio Laiso kept me turning the pages, his art is playful and even the most comical scenes are really well done. Before I say how great Laiso is with his art, I have to say even his skill with a pencil didn’t save the issue since I really didn’t care for the slow paced drama of the story. His design of these old mythological heroes is pretty interesting and I was more interested in seeing Laiso’s depiction of these heroes instead of actually reading the comic. His angles are great, and when it comes to a scene where Hercules goes into a chaotic rage mode, it was something they could make a poster out of that I’d happily mount on my wall.

I went through two issues hoping things would pick up; the title of the series pulled me in, the art kept me interested, but the lack of pure intensity in the story is just not sitting well with me.  It seems to me that the story could have just been titled Hercules instead of Gods of War. It didn’t feel like it had much of anything to do with Civil War, even as  filler, it’s just about Hercules. The first issue had a couple of pages about what’s going on in the Civil War, but the major heroes in the Marvel Universe have made it perfectly clear that they don’t want Hercules involved. Hercules didn’t take that rejection in stride very well, and I got a story that felt more about his depression towards not being included in the major Civil War situations.  The lack of action here is just not my cup of tea, and I’m done with it after this issue.

The goal of ComicSpectrum is to provide a one-stop reference for everything about & related to comics and comics culture.
View all posts by comicspectrum →
This entry was posted in Marvel and tagged Civil War II, comics, Dan Abnett, Drama, Gods of War, Hercules, Marvel, Super-Heroes. Bookmark the permalink.