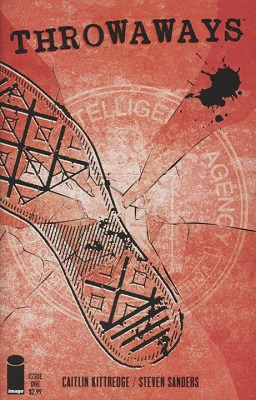 Throwaways is espionage slang for a disposable asset, an assassin meant to die along their intended target.  At it’s heart, Throwaways is meant to be an action thriller set in the espionage world, but ultimately the debut issue felt really disjointed to me.

Writer Caitlin Kittredge starts out with one of my least favorite literary devices, the flash forward.  This is typically used to start a story off on an action-oriented scene when the actual start is slower and will build in momentum.  The “4 hours earlier” pages are certainly action-packed, so what the flash-forward really accomplishes is showing one of the protagonists, Dan, manifesting a Magneto-like ability to capture fragments of metal in mid-air and hurl them back at his attackers (this is page 2 of the story, a full page spread that is the first thing to catch your eye when opening the comic, so not really a spoiler).  The rest of the story jumps around as an endless supply of heavily armed assailants attempt to kill both Dean (with his girlfriend along for the ride) and the 2nd protagonist, a female (ex?) soldier named Palmer.  Add in various flashback, hallucinations, and a couple of cut-scenes that will likely weave into the story in a later issue and I ended up having a really hard time following the story.  The art, by Steven Sanders, felt very stiff to me, which didn’t help matters as the action kept building throughout the issue.

Throwaways felt like a story that will read better in a collected edition than in serialized issues.  There were a lot of unresolved and disjointed scenes in this first issue and the “4 hours later” flash-forward that opened things up was not resolved in this issue.  The story and characters just didn’t click with me.  I never developed a bond with either of the 2 main protagonists, and exited the issue not really caring what happens to either of them.  Perhaps had I been able to keep going (in the TPB collection) this bond would have developed and I’d have gotten a better idea what was going on.  As it was, this #1 issue failed to make me want to come back for more.

The goal of ComicSpectrum is to provide a one-stop reference for everything about & related to comics and comics culture.
View all posts by comicspectrum →
This entry was posted in Image and tagged action, assassin, Caitlen Kittredge, Espionage, Steven Sanders, super-power, Throwaways. Bookmark the permalink.