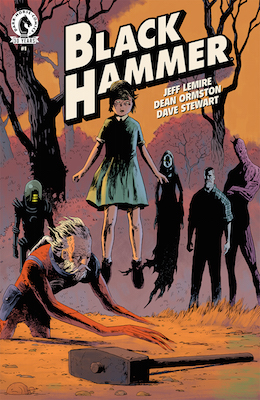 Black Hammer impressed me from the first page until the very end in an almost perfect combination of writing, art, and colors. Writer Jeff Lemire, artist Dean Ormston, and colorist Dave Stewart have created and designed a great cast of characters that we don’t know too much about yet, but after reading this opening issue, have made it so it’ll be tough having to wait to read more. It’s not a surprise that Lemire has another potential hit on his hands, but it is surprising at just how much potential this series has!

Black Hammer’s opening pages introduce us to Abraham Slam and Golden Gail. The setting is a farm that’s similar to the Kent farm from Superman. As the two talk, you realize that there’s something not quite right with their relationship and it only gets more complicated as the story goes along. Additionally, we’re introduced to more of the characters that were once known as the greatest heroes of the Golden Age, all trapped, or at least tied to this same farm. Talky Walky is a robotic sidekick of Col. Weird who is just that, mumbling throughout the issue of the dangers of the Para-Zone. We also get the mysterious Madame Dragonfly and Barbalien, the “Martian Manhunter” of this team.

Lemire doesn’t throw a whole lot of action into this book, in fact there’s almost none at all. What he does do is create a mystery of just who these characters were, why they’re all on this farm, and what does the outside world know about them? Each character is given enough time to make you question the origins of each, building that potential mentioned above for plenty of stories that take place in the present as well as during their time in the Golden Age, not to mention each of their individual genre defining characteristics. Dean Ormstom’s art is a perfect match for the story. He also hints at two different styles we may see throughout this series, the present day pencils that have a realistic feel especially when paired with Dave Stewart’s colors, and the flashback pencils that we only get a small taste of in this issue are similar in style to the iconic art of Mike Mignola.

The first issue of Black Hammer is a fantastic read that did all it needed to do to hook me on the series.  It introduces an all new group of heroes that span multiple ages of comics history. Lemire, Ormston and Stewart have created one of my favorite premiere issues of the year so far, right up there with Dark Horse’s other solid first issue, Dept. H. I can’t recommend this issue enough. It’s truly a must read!

The goal of ComicSpectrum is to provide a one-stop reference for everything about & related to comics and comics culture.
View all posts by comicspectrum →
This entry was posted in Dark Horse and tagged Black Hammer, comic books, comics, Dark Horse, Dave Stewart, Dean Ormston, Golden Age, Jeff Lemire. Bookmark the permalink.