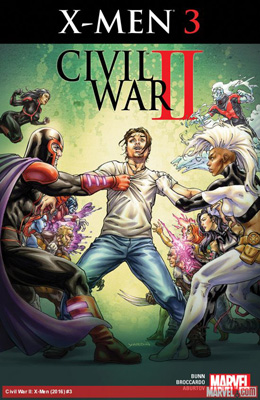 When I first grabbed this series I thought to myself, “Oh look, one more X-title, but it’s part of the Civil War.” I jumped onboard the series and have had mixed feelings. Ever since the terrigen mist swept across the planet Inhumans have been popping up like daisies and Mutants have been dying left and right. In my personal opinion on the story, it’s pure genocide against the Mutants. The mist was contained prior to this, and there have been parts that show certain organizations in the Marvel Universe are collecting the terrigen mist to use as biological weapons against Mutants. If the mist can be collected and contained, how come no one is stopping this? Well leave it to this most recent issue to bring up my concern, and I’m not usually one for Magneto and his crazy psychotic antics, but I’m on his side this time.

Writer Cullen Bunn comes into this series to provide answers to my months of constant questions regarding Mutants and Inhumans. I like that Bunn is providing all these answers, but I honestly don’t feel this series was necessary. Bunn brings the goods to this title, explaining in a more socially fad way that Inhumans are the next big thing. When Magneto is explaining to Rachel Summers about the constant deaths of Mutants, he points to oncoming teenagers on their cell phones. Rachel, while using her telepathy, picks up how the teenagers are excited about the new Inhumans in the area because of a recent terrigen mist that swept through, but couldn’t care less about the hundreds of Mutants that were just killed by the mist at the same time. Politically, I just don’t understand how this genocide is ever remotely okay in the Marvel Universe. I then watch an episode of the TV series “Lie to Me”, and the concept fits perfectly. Some people are all about what’s being pushed as socially cool, even some of the most disgusting and controversial things. I guess genocide is cool as long as it’s towards someone else, I don’t know if this is a depiction of racial, spiritual and gender issues that we have been dealing with for years now, but are just being escalated in recent events. It’s a political issue, and sadly the only people that seem to really care are the people being killed off, the Mutants. With all these world events being stopped and contained with the Inhuman Ulysses’s powers, how come he’s not shoving it in everyone’s face that Mutants are being killed? Wouldn’t this be a major issue in the Marvel Universe? As much raw emotion that this is causing for me I have to give Bunn props for his ability to make me feel this so hard.  Artist Andrea Broccardo brings some playful art styles to the page with great angles and shading. With Broccardo’s wide spread art style being as playful as it is I’m almost sorry me that this title is not going to be ongoing.

A big problem I had was this even being a separate Civil War II tie-in series. I feel it could have easily been told in Extraordinary X-Men and Uncanny X-Men as part of the  Civil War II event. There always seems to be an X-series going on where you have to go through several comic titles for the whole story, so why not with this situation? I get that it’s a marketing thing for Marvel, but the large abundance of random comics right now seems a bit much for me. They could have put the Inhuman titles and X-Men titles into one connecting storyline. All in all, this title answered my questions as to why no one is seeing that the Mutants are dying. I just don’t like how Marvel is making Mutants even more of a pariah than usual, but I guess it’s no surprise because Mutants have been Marvel’s pariah for years. Personally I can’t help but find it a little tiresome when a company’s only angle for specific characters is constant hatred and destruction of their own species. Everything changed after Secret Wars, so why keep kicking the horse that has been dead for years?

The goal of ComicSpectrum is to provide a one-stop reference for everything about & related to comics and comics culture.
View all posts by comicspectrum →
This entry was posted in Marvel and tagged Civil War II, comics, Cullen Bunn, Inhumans, Magneto, Marvel, X-Men. Bookmark the permalink.