Posted on September 18, 2016 by comicspectrum 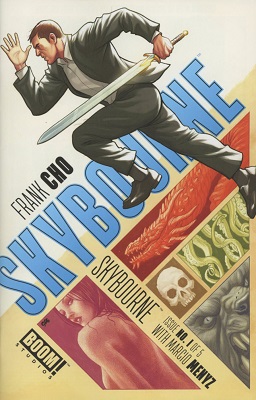 Skybourne is created, written, and drawn by Frank Cho.  A lot of people have strong opinions about Cho, mostly familiar with and judging him for his cheesecake variant covers.  No cheesecake in Skybourne, just action.  Violent action.  The high concept (from the inside front cover) is: Lazarus, after his miraculous resurrection, fathered three children; Abraham, Thomas, and Grace Skybourne.  All three children were blessed with superhuman strength, impenetrable skin, and immortality.  This is their story.

After a brief introduction with one of the three falling from a plane over China, 25 years ago, the scene moves to present day Istanbul as Grace Skybourne is attempting to complete a deal for a sword with a shady guy named Ahmed.  This devolves into violent action.  Squeamish readers might call it over-the-top violence, I’m more inclined to just proclaim it to be “cool”, as things quickly escalate in a fashion I was not expecting, but once they did, they set the tone and the ensuing chase gives ample demonstration if the abilities possessed by the Skybourne siblings.  I’m a huge fan of Cho’s art style and storytelling.  He uses minimal backgrounds, but they’re sufficient to set the scene and ground the action.  The whole issue was over very quickly but that was because I was devouring it and the flow was so quick, like an action movie.  I went back and read it a second time, slower, and took more time to absorb what was going on in more detail.

It’s rare that I give a comic a second read through, except when it lacks clarity and I’m trying to figure out what’s going on.  No lack of clarity here, I read it the second time for the sheer enjoyment of it.  Frank Cho is, in my opinion, a masterful storyteller, and this super-powered fantasy thriller is a great example that he can tell a gripping story without scantily clad women in it.  Grace Skybourne kicks ass, and does it fully clothed.  And NOBODY should want to get on her bad side.  Life expectancy on her bad side is very short indeed.  Cho has an engaging cliffhanger, but there is a built-in out for it, so I expect the action to continue on next issue as Cho kicks it up a notch.  I’m looking forward to watching the rest of this story play out over the next few months, this is a 5 issue series, and it’s great to see Cho back doing sequential storytelling after just seeing him on covers and sketches for so long.

The goal of ComicSpectrum is to provide a one-stop reference for everything about & related to comics and comics culture.
View all posts by comicspectrum →
This entry was posted in Boom! and tagged Boom!, Excalibur, Frank Cho, Immortals, Lazarus, Skybourne, super strength. Bookmark the permalink.