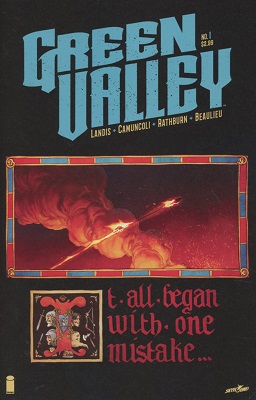 Max Landis, writer of Superman: American Alien and the movie Chronicle, brings one of his unfilmed screenplays to comics with Green Valley.  It’s the story of 4 knights who seem to have everything going for them until they make a classic mistake: Don’t let your enemies go undefeated because they’re likely to strike back at you later.  The cover declares “It all began with one mistake”…and the issue plays out nicely enough, introducing Ralphus, Bertwald, Gulliver, and Indrid as they banter with one another while facing down a barbarian horde.

Landis delivers a swords & armor type of medieval tale ably illustrated by Giuseppe Camuncoli on pencils and Cliff Rathburn on inks (a book that still uses an inker is a rarity!) with a lot of humor, action, and heart.  While I could have guessed how the issue was going to end, Landis assures us (in the backmatter) that we have no idea where the story is going to go from here.  Nothing, he says, can prepare us for where this goes or why it goes there.  This is probably true, as long as you don’t Google “Max Landis” and look up his list of screenplay summaries while, I don’t know, preparing to write a review.  The summary for Green Valley gives away quite a lot and he’s right, I didn’t see it going there (if he indeed keeps the plot thread of the comic the same as his unproduced screenplay).  If you want to keep the surprise factor there as you read the comic series, don’t do the Google search that I did.

If you like epic battles, sieges, and sword fights Green Valley should be right up your alley.  Landis promises to take us places we don’t expect: “Nothing you’ve seen so far has betrayed how complicated our story really is”.  I’ll believe him.  I enjoyed this issue and the cliffhanger he leaves us with is a jumping off point to a couple of obvious continuation points, I’m very interested to see how Landis makes good on his promise to give us a ‘what happened next’ that is totally unexpected.

The goal of ComicSpectrum is to provide a one-stop reference for everything about & related to comics and comics culture.
View all posts by comicspectrum →
This entry was posted in Image, Skybound and tagged barbarians, battles, comics, Green Valley, Image, Knights, Max Landis, siege, Skybound, sword fights. Bookmark the permalink.