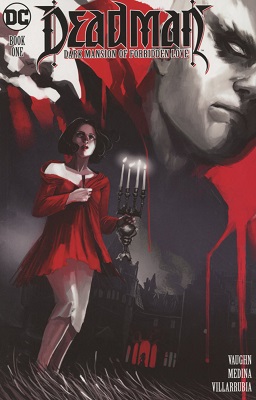 I’ve loved the Deadman character for decades.  He is not used much, and sometimes he is not used well, but when there is a good story featuring the character it can be exceptional.  This is in the “character used well” category, in my opinion.  Let me define what sets the bar for a good Deadman story in my eyes.  It’s all about the characters and situations presented.  You don’t need a lot of background in the character to enjoy these stories, other than knowing he’s a ghost who can possess the bodies of the living with a goal of helping them out.  Since he’s a ghost he can interact with metaphysical threats directly, but he cannot directly interact with humans, to do that he needs to temporarily possess someone.  possessing a body in order to interact with the living.

The title of the series is a nod to the Gothic romance comic Dark Mansion of Forbidden Love that DC published in 1971 for four issues, renaming it to Forbidden Tales of Dark Mansion from #5 through 15.  An appropriate title since one of the stars of this Gothic tale written by Sarah Vaughn is the mansion itself, which both acts as an attractor to Deadman and, once he enters, a trap.  He cannot leave so he’s going to need to get to the bottom of the mystery. The other main draw for me on this 48 page squarebound comic  is the lush art by Lan Medina with gorgeous painted color by Joe Villarrubia.  Other than Deadman, the main characters are Berenice and Nathan, the couple who inherited the mansion, Berenice’s friend Sam, and the spirit of Adelia Ruskin, resplendent in her flowing white dress and other than her translucent appearance looking like she could have come off the cover of any of the 1000s of Gothic romance novels published over the years.

This first issue sets the stage, but we won’t have long to wait for a conclusion, this is only a two issue series, so next issue will wrap things up.  Far from old fashioned, there are a lot of modern dynamics at play in this issue, including ones of sexuality and gender identity that are handled very subtly.  Vaughn is adept at weaving these into the fabric of the characters, making them just a part of fleshing out the personalities and lives of the people she is writing about instead of blatantly cudgeling the reader with really overt cues.  These are facets of the characters but are not made to seem as though the only reason the characters exist in the story is to be a platform to showcase these aspects of their lives.  Deadman: Dark Mansion of Forbidden Love is a wonderful first issue and I look forward to seeing how the creative team wraps up the story in the conclusion.

The goal of ComicSpectrum is to provide a one-stop reference for everything about & related to comics and comics culture.
View all posts by comicspectrum →
This entry was posted in DC and tagged comics, Dark Mansion of Forbidden Love, DC, Deadman, Jose Villarrubia, Lan Medina, Sarah Vaughn. Bookmark the permalink.