Posted on November 7, 2016 by comicspectrum 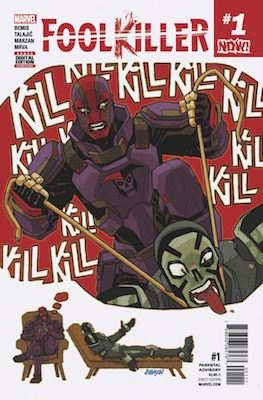 I’ve mostly stayed away from all of the current Deadpool and Deadpool-family of series as of late. Whether it be the main series or the ones where he’s a co-star like Mercs for Money, I haven’t found myself enjoying the character, or his teammates. I recently reviewed the first issue of Solo and found it to be unappealing and unoriginal. Now another of Deadpool’s partners, Foolkiller, has gotten his own series and so far, it’s pretty great!

My main complaint with the Solo book was that they took a character whose background is fighting terrorism after his girlfriend was killed, and made him into another wise-cracking hero. Here Foolkiller’s backgrounds are wonderfully explained and acknowledged as writer Max Bemis embraces the character’s somewhat goofy origin. In the past, Foolkiller has been on a mission to “make people pay for betraying their inner truth…for being a fool”. This origin is brilliantly referenced in just two pages by Bemis and wonderfully laid out by artist Dalibor Talajic. Bemis and Talajic do a great job of getting a reader who may not be familiar with the character completely up to speed, while at the same time setting the stage for future issues.

Most of this first issue is spent getting to know the current Foolkiller, Greg Salinger. Greg is a psychotherapist who is counseling a troubled youth who was modeling himself after the Red Skull. Through Greg’s internal monologue we get to know his own internal struggles as he’s coming to grips with his new life, and the challenge of keeping his old life as Foolkiller at bay. The writing and art compliment each other quite well and the ending had me guessing about just where this book is headed next. Because of the current Deadpool series and my dislike for Solo, I was about to pass this series by. Thank goodness I didn’t, this is a series I’ll continue to follow…I mean, I’d be a fool if I didn’t!

The goal of ComicSpectrum is to provide a one-stop reference for everything about & related to comics and comics culture.
View all posts by comicspectrum →
This entry was posted in Marvel and tagged comic books, comics, Dalibor Talajic, Foolkiller, Marvel, Max Bemis. Bookmark the permalink.