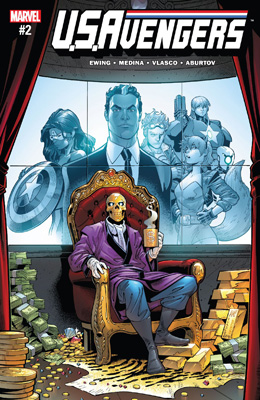 Rating: 4.5/5 – Yet Another Avengers Team, but This One is Fresh and Fun!
by ComicSpectrum reviewer Adam Brunell

Looking for random new comics to read I came across the first issue of U.S. Avengers, I grabbed the first issue, and it got me to come back for the second issue. Most of the characters are familiar, former X-Men characters such as Cannonball, and well known heroes like Squirrel Girl. Some heroes are new to me, especially the Red Hulk. The concept for the comic was fun and interesting for me.

Writer Al Ewing and Artist Paco Medina come in strong, bringing a little intrigue and fun. What appears to be a possible close future requires a new team of heroes. A team formed of a future Captain America, an old X-Man, a new Iron Patriot and more to form the U.S.Avengers. Every Avengers team needs a villain, someone villainous enough to require a team to take them down. Who better to antagonize this new team then someone from the future that is just as corrupt and ingenious as any Avengers villain in the past? Bring in the Golden Skull with a master plan. The first issue was about bringing the team together and introducing the heroes as if they are doing a reality TV show. In this second issue the team is ready to roll; high society parties and task force operations are the first mission, but they have a surprise waiting for them… but there isn’t a lot more information that I can go into in this review without spoiling the story.

A comic like this with heroes coming out of every corner feels fresh and new. When I use the word “fun” to describe it, I mean that the set of characters in the comic to bring back old comics memories that made me happy. I’m continuing the series for now and I’m curious to see where the team ends up next.  After a few more issues we’ll see if it gets a more permanent spot on my pull list.

The goal of ComicSpectrum is to provide a one-stop reference for everything about & related to comics and comics culture.
View all posts by comicspectrum →
This entry was posted in Marvel and tagged Al Ewing, Avengers, comics, Marvel, Paco Medina, USAvengers. Bookmark the permalink.