Posted on February 11, 2017 by comicspectrum 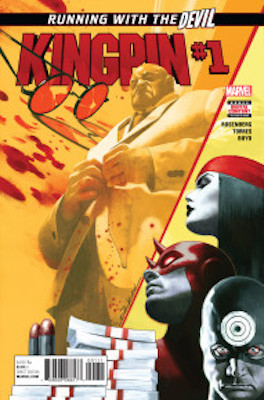 Rating: 4/5 – Showing a Softer Side of the Kingpin.
By ComicSpectrum senior reviewer Shawn Hoklas.

Kingpin has had his fair share of ups and downs, but throughout it all he has remained one of Marvel’s most compelling and iconic villains. Most recently, we saw the brilliant interpretation of the character in Netflix’s Daredevil series. He was portrayed as a violent and ruthless villain who also wanted what’s best for Hell’s Kitchen, as well as for his love interest, Vanessa. This all new Kingpin ongoing series gives us a very similar Wilson Fisk to what we saw in that series, a violent mastermind who also happens to want and be something more.

Writer Matthew Rosenberg does a really great job throughout this first issue of balancing the two sides of the villain, weighing more in favor as someone who is trying to become better than he what he is, and what he may be most known for. The Kingpin wants to publish his biography and he attempts to court an unknown writer named Sarah Dewey who knows of the Kingpin’s past to write it.  Sarah is a great balance for the imposing Fisk not only in stature, but personality as well.

The art by Ben Torres is exceptional, and a fantastic fit for the story. There are panels that are reminiscent of Frank Miller with some heavy blacks and somewhat blocky bodies that could be found in Miller’s past Sin City work, but he’s also able to soften the characters when needed, especially in a scene where Wilson and Sarah are sharing donuts in a diner. It’s a great scene that shows this may be a different Wilson Fisk than we’ve seen in the comics before, even though by issue’s end you’ll be questioning his true motives.

There’s little to no action in this first issue as Rosenberg spends most of the time developing the personality of Kingpin’s potential biographer, while showing a softer side of Wilson Fisk as he has multiple encounters with her throughout the issue.  Overall, this first issue is a great start to what I’m hoping will be a successful and long lasting series about one of Marvel’s best villains!

The goal of ComicSpectrum is to provide a one-stop reference for everything about & related to comics and comics culture.
View all posts by comicspectrum →
This entry was posted in Marvel and tagged Ben Torres, comic books, comics, Kingpin, Marvel, Matthew Rosenberg. Bookmark the permalink.