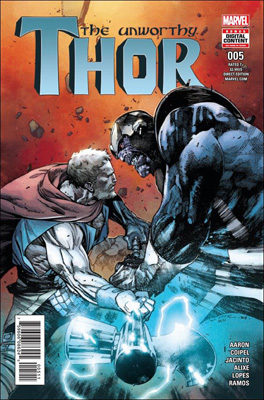 Rating: 5/5 – The Whisper That Made Thor Unworthy is Finally Revealed.
by ComicSpectrum reviewer Adam Brunell

Issue 5 of the Unworthy Thor was released this week; it’s been a very long road of enigma and action. The Odinson became unworthy back in Marvel’s “Original Sin” event in 2014, and wasn’t seen for some time. During his time of hiatus Jane Foster rose to be a Mighty Thor, but there was always something in the comics pointing out that the Odinson was nowhere to be found. 5 months ago readers found out where the old Thor was and what he was doing, he was a prisoner looking for another weapon of power, that weapon happened to be the Ultimate Thor’s hammer from the Ultimate Universe. One thing stood between Thor and the Ultimate Mjolnir, and that was The Collector.

It’s been a wild and exciting ride to say the least. If there is one thing that Writer Jason Aaron can do well with his stories, it’s to tease and throw you a curveball. Since 2014 readers that followed the fall of Thor have wondered, “What was the whisper?” Nick Fury said one simple thing and Thor became unworthy, but what was said was so small in print that you couldn’t make it out. The time has finally come to know what was said….so I would recommend picking up the latest issue of Unworthy Thor to find out just what it was. Thor took those words to heart, so much to heart that it ran with him all the way to the very end of this series. Aaron provides an extremely emotional and powerful story with an intense ending. Thor fans will either love it or hate it, but a different kind of Thor will rise with the Ultimate Mjolnir in hand, and Odinson will be changed forever. Through this series the art alone has been a big factor in making this series pure gold for me.  Artists Olivier Coipel, Pascal Alixe and Kim Jacinto have delivered colorful, powerful and extremely emotional art through this entire run.

I now know what was whispered to Thor to make him unworthy, and it makes perfect since as to why Thor would think himself unworthy because of it. It speaks volumes for Thor, and if what was said had this much of an impact on him, the Odinson obviously is wrought with self-esteem issues. I found this whole situation to be an emotional ride from start to finish, and Thor has become a much stronger hero and person because of it. Now, what will this new Thor bring to the Marvel Universe? Is he bringing a war with him, and who are the combatants?  So many questions have been answered just to leave more mysteries in its wake.  I look forward to seeing Thor’s continuing tale unfold.

The goal of ComicSpectrum is to provide a one-stop reference for everything about & related to comics and comics culture.
View all posts by comicspectrum →
This entry was posted in Marvel and tagged comics, Jason Aaron, Marvel, Mjolnir, Olivier Coipel, Original Sin, Thor, Ultimate Thor, Unworthy Thor. Bookmark the permalink.