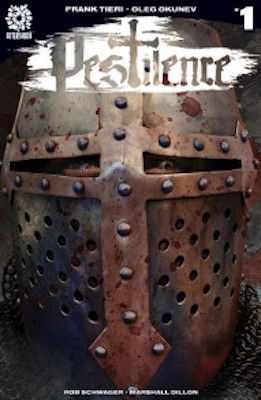 Rating: 4/5 – What if the Black Plague was Really Zombies?!
By ComicSpectrum senior reviewer Shawn Hoklas.

There’s not a whole lot of depth to the debut of Aftershock’s newest series Pestilence in the first issue. Instead, writer Frank Tieri and artist Oleg Okunev give us the first glimpse of a world that combines a healthy dose of violence, sex, and horror during the times of the Crusades with a bit of humor thrown in for good measure. This book isn’t for the squeamish or the easily offended and it looks as though it’ll only get worse from here.  So far, I’m OK with that.

The plot of the book is that a group of religious crusaders is tasked by the Church to hunt down and bring in line another group of Crusaders who have gone rogue. This rogue group is committing all sorts of heinous crimes and morbid acts all in the name of the Church, which Okunev has no problem drawing. Meanwhile, there’s an even greater threat to the Church as it looks as though the black plague is in fact, the world’s first ever zombie outbreak. It’s a clever twist, and although I didn’t think I was ready for yet another zombie book, I was entertained throughout.

Okunev’s art was a treat with his slightly exaggerated, yet sharp line work. I love his character work and although his character designs are fairly simple, they’re enough for each character to have their own unique look. The leader of the group, Roderick Helms, looks worn, weathered, and tired and I can’t wait to see more of his team’s back story. Again, Okunev draws some graphic and violent scenes of explicit violence and rape, and even though he does place the the point of view further away so as to not totally offend, it still has the potential to turn some readers off. This isn’t quite the scope of some of Avatar’s more excessive books, but it gets close.

AfterShock continues to impress me and while another zombie book may not appeal to you at first, Tieri’s writing makes this one fun and Okunev’s art is makes it exciting and memorable. I’ll be back for more of Pestilence and I’m hoping the creators can give us something we may not have seen before within the genre.  I’m confident they will!

The goal of ComicSpectrum is to provide a one-stop reference for everything about & related to comics and comics culture.
View all posts by comicspectrum →
This entry was posted in Aftershock and tagged Aftershock Comics, comic books, comics, Frank Tieri, Oleg Okunev, Pestilence. Bookmark the permalink.