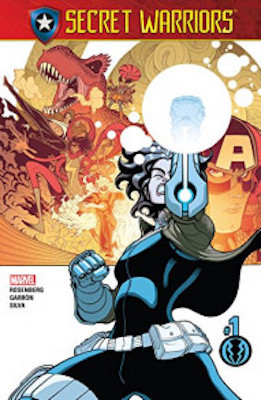 I’m a big fan of Jonathan Hickman’s run on Secret Warriors. That book had a sprawling story that put Hickman on the map and started his successful journey with Marvel. Now, spinning out of Secret Empire, a new series takes the same name focusing on a similar theme of S.H.I.E.L.D. vs. Hydra with a completely different team and so far, mixed results.

Writer Matthew Rosenberg and artist Javi Garron’s first issue of Secret Warriors is another “getting the team together” book that requires you to read Secret Empire in order to get the complete picture.  That may turn some readers off who are looking for another Secret Warriors series and are not invested in Marvel’s current event. This Warriors team is led by previous Secret Warrior Daisy Johnson, an Inhuman with the power to create earthquakes. The story jumps between the present and most recent past where Daisy sees Captain America’s turn to Hydra. As Daisy is chased down by Hydra agents, she needs to put a team together to fight back. It’s a solid story, but for me didn’t do anything really special to make it memorable.  The art by Javi Garron is really strong. He has a subtle animated feel to his work and it reminds me a bit of Stefano Caselli. At times the colors ran together, especially towards the second half of the book where there’s lots of reds from the sky, costumes and more. This is a minor complaint though as this is a pretty book! It just may not be enough for me to stick with this series.

That team consists of other Inhumans Ms. Marvel, Moon Girl and Karnak. Not that it’s a bad thing, but this so far feels like another Inhuman book with a touch of S.H.I.E.L.D. thrown in because of Daisy’s leadership (not surprising given how prominently the Inhumans are in the S.H.I.E.L.D. TV show). The team works together well, and if you’re loving the current Inhumans books and Secret Empire, this should appeal to you. On the other hand, if you’re not reading any of the Inhumans books or Ms. Marvel, and adding in the fact that you do need to have an understanding of Secret Empire, there’s quite a large potential barrier to entry for new readers who are not “all in” on the books tied to this one. The bottom line is this is not really a good standalone read, but may be more enjoyable if you’re reading the other titles in the family.

The goal of ComicSpectrum is to provide a one-stop reference for everything about & related to comics and comics culture.
View all posts by comicspectrum →
This entry was posted in Marvel and tagged comic books, comics, Inhumans, Javi Garron, Marvel, Matthew Rosenberg, Secret Empire, Secret Warriors. Bookmark the permalink.