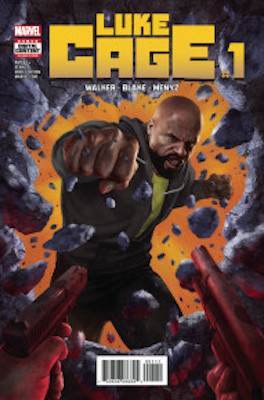 Luke Cage is definitely more popular now than he’s ever been at before. He just wrapped up a mini-series from the creator of Samurai Jack, he’s starring in a series with long-time partner Iron Fist, is part of the new Defenders, has his own Netflix show, and now is getting another solo series simply titled, Luke Cage. This new series is written by David F. Walker who’s been writing the Power Man and Iron Fist series which I’ve really enjoyed, and drawn by Nelson Blake II whose work I’m not so familiar with. As far as first issues go, it was pretty entertaining.

Dr. Noah Burstein, the doctor behind the creation of Luke Cage has passed away. After attending his funeral, Cage encounters a woman who had worked with Dr. Burstein who informs him that the Doctor’s apparent suicide may not be all that it seems. This leads Luke onto a path to find out more details behind the Doctor’s death which doesn’t come easy. Walker does a really nice job of introducing us to all the important characters of the story, and putting Luke Cage into some real danger. On the art side, Blake’s Cage looks good, as do the rest of the characters, though the art at times does come off looking a bit stiff, and the backgrounds are really sparse which gives all the settings a generic look.

Luke Cage number one is a solid first issue that does all it needs to do to set the tone for the series. The ending of the story may leave some newer Luke Cage fans a bit confused, but to me it got me excited for what’s ahead and I quite enjoyed it.  I’m looking forward to seeing more of what this team has to offer. If you’re looking for more Luke Cage, I think this is a worthy addition to all the other places he’s been appearing lately.

The goal of ComicSpectrum is to provide a one-stop reference for everything about & related to comics and comics culture.
View all posts by comicspectrum →
This entry was posted in Marvel and tagged comic books, comics, David F. Walker, Luke Cage, Marvel, Nelson Blake II, Power Man. Bookmark the permalink.