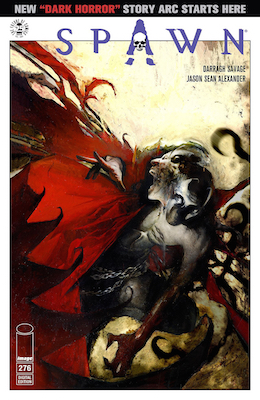 If you look at my past reviews for Spawn, you’ll notice that I usually review this title at a new arc, or a new creative team, or even an advertised jumping on point. I reviewed issue #250, a triple-sized anniversary issue. Then Issue #256, which saw Paul Jenkins and Jonboy Meyers take over the title which unfortunately didn’t last long, in fact it only lasted until issue #259 when Erik Larsen came on board whose run went until issue #267, where McFarlane and Kudranski took back the creative reins. Now with issue #276, a new creative team has taken over with a headline that announces a new story arc called “Dark Horror”.

I have a soft spot for this title and I want to read Spawn but the book always fails to keep my attention for long. I read a couple issues of all these new arcs and creative changes hoping that it will hook me, but it never does. After the beginning of an arc fails to grab me I step away, hoping the next one will be different. So did this new issue make me want to read more? The answer so far, is no.

What’s interesting about this issue is that McFarlane’s name is nowhere on the cover, or in the credits, which may be a series first. Writer Darragh Savage is credited for the script and plot, while Jason Sean Alexander handles the art. This isn’t a good or bad thing, it just should be noted as I can’t remember a time in Spawn’s run where McFarlane wasn’t credited in at least the plot (but please correct me if I’m wrong).

This issue sees Wanda’s daughter Cyan moving to Tokyo and being haunted by a “The Ring”-like girl, who has also been noticed by Spawn who has been following Cyan to ensure her safety. We also get a look at another villain who must be some type of demon, although writer Savage isn’t revealing everything just yet. I really enjoyed the art by Alexander. It’s a gritty art style and at times, he definitely reminded me of a young Sam Keith. As is usually the case with a Spawn book, the colors are dark and Spawn remains hidden in shadows for the majority of the issue.

While this new story arc isn’t bad, it unfortunately just didn’t connect with me. It may be because I keep jumping in and out of this series and never really become invested in the ongoing storyline.  I keep hoping that a creative team will come along that can hook me right away and get me excited to keep reading. Maybe that will happen next time I pick it up, hopefully it will get me back before issue number three-hundred.

The goal of ComicSpectrum is to provide a one-stop reference for everything about & related to comics and comics culture.
View all posts by comicspectrum →
This entry was posted in Image, Image Comics and tagged comic books, comics, Darragh Savage, Image, Sean Alexander, Spawn. Bookmark the permalink.