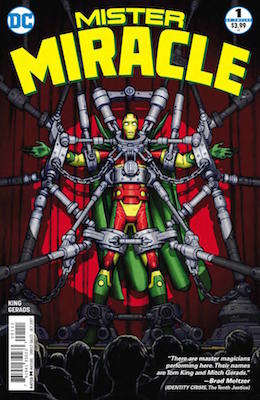 The New Gods have had their ups, but they have also had plenty of downs. They were handled most recently, and effectively I might add, by Geoff Johns and Jason Fabok in the Justice League event ‘The Darkseid War’. Prior to that, in the New52, they’ve also been seen in a Green Lantern story and a smattering of books here and there, but they haven’t held their own series for quite some time. Now, Forager has his own title under the Young Animal imprint and Mister Miracle has his own twelve issue mini series that although set within the DCU, definitely stands apart. After just one issue, Tom King is showing us just how compelling and crazy, in the best of ways, these characters can be.  And this first issue was an instant sell out at comic shops.  Chances are if it wasn’t on your pull list or you didn’t hit the shop within the first couple of hours on Wednesday, you’re going to need to wait for the 2nd printing.

Mister Miracle starts off in an unexpected way, with Scott Free attempting suicide. The visual interpretation of this scene is a powerful one with artist Mitch Gerads showing us Mister Miracle sprawled out on the floor bleeding out from his wrists in a double page splash that contains the credits and title. It’s a dark scene that sets the tone for what’s ahead. From that scene on, you get the sense that something is off with Scott and the world around him. There’s a continuing presence of Darkseid that’s so simple in its effectiveness, but hints that things are not what they seem. Throughout it all, Gerads’ art fits this story so well and his colors go from light to dark to match the different and purposefully confusing segments of the story.

Writer Tom King isn’t giving us the answers just yet. In fact, after reading this first issue I’m not sure what direction this book is headed in and what I might actually be seeing, and that’s what makes this issue so great. Mister Miracle seems lost, and as the reader I feel the same way. All the scenes make sense on their own, but put them all together and you start to question what you just read.

Before the second issue comes out, this is a book that I’ll have to read again, which isn’t a bad thing because it means seeing King and Gerads laying the foundation for what’s to come. Tom King is proving to be one of the best writers in the business right now and Mister Miracle #1, shows why. Hopefully this book will shine a spotlight on the New Gods, showing all their untapped potential.  At the very least, even though it’s about the world’s greatest escape artist, King isn’t allowing us to escape the story he’s drawing us into!

The goal of ComicSpectrum is to provide a one-stop reference for everything about & related to comics and comics culture.
View all posts by comicspectrum →
This entry was posted in DC and tagged comic books, comics, DC Comics, Mister Miracle, Mitch Gerads, New Gods, Tom King. Bookmark the permalink.