Posted on September 22, 2017 by comicspectrum 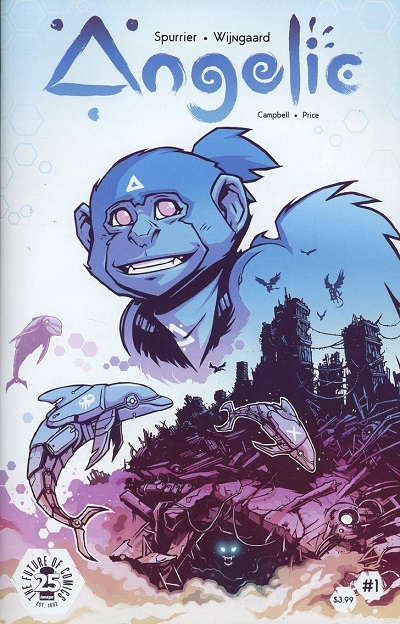 Angelic is why I love comic shops that stock new comics series “on the rack” and not just in the pull boxes of subscribers.  This comic didn’t get a “pre-order” thumbs up from me when I saw it in Previews a couple of months ago, I’m not really sure why.  But being able to take a look at it when it came out?  SOLD!  Let’s call it post-apocalyptic and we don’t yet know what happened to humans, but they’re not around in this story.  What we do have is a society of winged monkeys living in the ruins of what looks to be a human city… there is reference to ‘the mans’ as the Devil’s doers, perhaps making them the architects of the apocalypse.

Angelic is good news for fans of futuristic argot (slang/jargon made up, in this case, to show the evolution of language over the years)… these guys say stuff like “Pray your sorries to the Maker!”.  Perfect meat for people who loved reading the Nadsat dialect in Anthony Burgess’ ‘Clockwork Orange’ or the speaking pattern of the Valleypeople in the 6th storyline of David Mitchell’s ‘Cloud Atlas’.  In comics we have the futurespeak of the humans developed by Alan Moore in ‘Crossed +100’, or that used by the characters created by Brian Azzarello in ‘Spaceman’ as examples of argot.

The story in Angelic #1 follows Qora, a female monk who longs to fly with the scrap packs that defend the monks from the dolphins with jetpacks (?!?!?!?) who make sport of hunting them!  (writing that last sentence was kind of mind blowing…)  The dolphins have their own argot that is just as fun as the one used by the monks.  Back to Qora… she longs to play a role that monk society has forbidden to females.  In fact, monk society is fairly sexist with the females highest honor being to be wed to the king, subsequently to be made ‘with child’.  It’s a grim society in many ways, especially for a female monk with high aspirations.  The uplifting silver lining to the story is the character of Qora, writer Simon Spurrier makes it pretty clear that she’s a nonconformist, it not only gets her into a situation by issues end but will also serve to drive the story moving forward.  Spurrier has created a very rich and intriguing world in 25 pages, ably assisted by the enchanting art of Caspar Wijngaard whose crisp angular style packs a lot of characterization into a minimum of linework leaving a lot of nuance to the colors that he is also providing.  Wijngaard doesn’t get too fancy with page design, but varies the panels and layouts enough to keep each page visually appealing and the story moving forward.

People who read my reviews know that I’m a big fan of “different” and Angelic #1 certainly ticks that box on the checklist.  I’ve never read another comic quite like this one, it stands out on the rack if you pick it up and flip through it and in stands out in my mind; this is a series I won’t have any trouble remembering month to month, it absolutely won’t blend into anything else I’m reading.  A winged monkey fighting the oppressive mores of monk society whilst also embarking on an adventure of discovery in Spurrier & Wijngaard’s post-apocalyptic world.  I’m looking forward to whatever new discoveries Qora makes on her journeys as Angelic marches on.

The goal of ComicSpectrum is to provide a one-stop reference for everything about & related to comics and comics culture.
View all posts by comicspectrum →
This entry was posted in Image and tagged Angelic, Caspar Wijngaard, comics, Flying Monkey, Image Comics, Jetpack Dolphin, post-apocalyptic, Simon Spurrier. Bookmark the permalink.