Posted on December 22, 2013 by comicspectrum 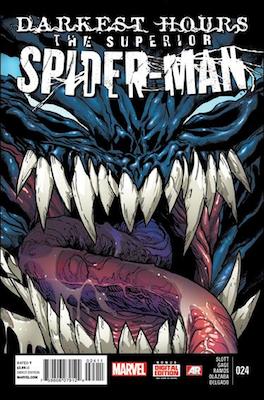 Superior Spider-Man number twenty-four sets the stage for next months conclusion of the Darkest Hours storyline, which will then lead into the big and rumored start of the end of Doc Ock’s Spider-Man run in the following Goblin Nation storyline.  Before we get there though, this Superior Spider-Man is feeling some of the pressures mount not only as Spider-Man, but as Peter Parker as well.  After removing the Venom symbiote from Flash Thompson in previous issues, it’s now bonded with Otto and he’s become even more “Superior” than before.

Humberto Ramos’ pencils in this issue makes Venom, and the multiple Goblins look terrifying.  Ramos’ art is always exaggerated, so seeing his work on Venom is a pleasure.  He’s combined the Spider-Man suit and the Venom suit into one and it looks great.  There’s an absolute great splash page including Mary Jane that long time Spider-Man fans will love.  It brings you back to the black costume and to the amazing Kraven’s Last Hunt story.  Although Ramos pencils the cover as well, the way Venom is depicted there doesn’t do justice to the way he draws him within the story.  I’ve loved Ramos’ art on this book, even more so than Ryan Stegman’s at times.  Unfortunately he won’t be the artist on the upcoming Goblin Nation arc, but hopefully he’ll be back soon after that.

Writer Dan Slott continues to make this one of Marvel’s funnest books, even though the material at times takes some dark turns.  Slott is building something big for next issue and the upcoming months.  The Goblins make a bold move towards one of the book’s major supporting characters, “Peter’s” personal life is closing in on him, and the ending looks as though it’s setting up a conclusion packed with guest stars galore.  This may not be the best issue to jump on board with, but it is yet another solid issue in what continues to be one Marvel’s consistently best books.

The goal of ComicSpectrum is to provide a one-stop reference for everything about & related to comics and comics culture.
View all posts by comicspectrum →
This entry was posted in Marvel and tagged Christos Gage, comic books, comics, Dan Slott, Darkest Hours, Dr. Octopus, Humberto Ramos, Marvel, Superior Spider-Man. Bookmark the permalink.