Posted on December 23, 2013 by comicspectrum 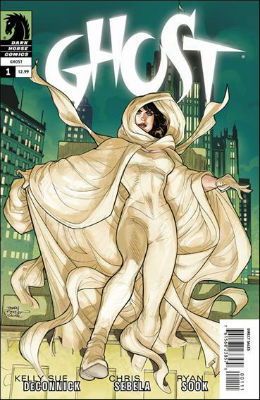 Rating: 4/5 – A strong start for the rebooted series!

I came into this issue without having read a single Ghost comic from the title’s past runs. That said, this debut issue for the new rebooted series has managed to provide a nice introduction to the character’s mythology while putting out an entertaining issue that made me excited to pick up the next one. It’s tough to do in only 22 pages, but the creative team of Kelly Sue Deconnick and Ryan Sook has done it with flying colors.

On top of the great creative team, the premise of the series gave me another good reason to pick up this title. The premise goes something like this: Elisa Cameron is Ghost, a former journalist who has been banished to hell by a demon but somehow got released by two paranormal investigators, Vaughn Barnes and Tommy Byers, into the intervening realm between the world of the dead and that of the living. Shrouded in a white cloak, Ghost is trying to piece together her fragmented memories and in doing so also hunts down demons wherever they might be lurking in the city of Chicago.

When it comes to great first issues, Ghost #1 has almost all boxes ticked.  It’s action-packed right from the get-go, which is always a good way to start a series. And contrary to my preconceived notions about the character, Elisa Cameron is not the brooding protagonist I’ve come to expect. For a “ghost,” Elisa’s very human, with human emotions that make her very relatable. Her own brand of wit is a delight to behold as well. (What’s not to like about a semi-disembodied spirit saying “eew”?) I’ve also taken a liking to the supporting characters from this first issue. The dialogue writing has been nothing short of exemplary, making the characters feel organic and fully realized with each scene. The main character’s internal monologue isn’t too text heavy but had enough subtext to give a good sense of what the protagonist is like and what makes her tick.  There’s also enough mystery and intrigue here to satisfy readers who love to play detective. My only quibble with this debut issue is while it is definitely well-written, nothing in it really knocked me off my socks. That, however, is not too big a deal, given the nice little twist at the end that really pointed the plot to exciting and intriguing possibilities.

Ryan Sook’s art has been absolutely breathtaking. His figures have an unmistakable dynamism that makes his characters come alive. And his style overall is just so visually appealing you can feel the vibrancy coming off every scene. He draws Ghost so damn well too, which is very important.

This new Ghost ongoing series is off to a great start, thanks to Kelly Sue’s strong writing and Ryan Sook’s gorgeous art. There’s nothing here that can be considered groundbreaking (at least not yet), but the issue has presented the series’s premise in ways that made the characters interesting and the plot engaging. As a new reader of Ghost, this issue has definitely made me a fan.

The goal of ComicSpectrum is to provide a one-stop reference for everything about & related to comics and comics culture.
View all posts by comicspectrum →
This entry was posted in Dark Horse and tagged comic books, comics, Dark Horse, Ghost, Kelly Sue Deconnick, Ryan Sook. Bookmark the permalink.