Posted on March 8, 2014 by comicspectrum 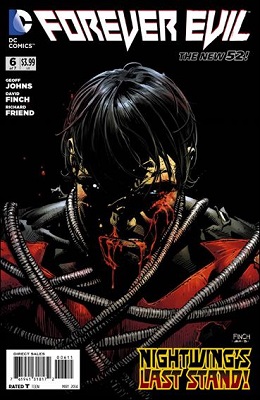 Rating: 4/5 – A fun read setting the stage for a big conclusion.
by ComicSpectrum reviewer Shawn Hoklas.

Forever Evil is just plain fun.  For a book about villains and over the top violence, it’s still a fun and exciting series.  There’s really not a lot of depth to this series, but that’s ok.  It’s not looking to be something that it’s not.  It’s a simple story that’s almost just a big “vs”. book, but with the simple twist that it’s all villains vs. villains, allowing us to root for characters that we normally don’t root for.  Geoff Johns is writing a book that uses it’s simplicity to it’s advantage, giving the reader exciting cliffhangers and compelling mysteries to propel the story forward past it’s simple premise.

In issue six of Forever Evil, one of the big questions has been answered in who the mysterious prisoner is, and it also looks as though Nightwing’s fate may or may not have been determined.  Johns introduced us to the hooded prisoner early on and fans have been guessing just who it is since then.  As he’s finally revealed this issue, I was disappointed in myself that I didn’t see this one coming.  It’s so obvious, and makes perfect sense for long time DC readers.  Johns adds some differences to the character that makes you want to learn more.   And Nightwing’s story looks like it may have finally concluded, although you get the sense that Johns still has some surprises in store, at least I hope he does.

I’ve already expressed my opinions on Finch’s art in previous reviews of this series.  Not much different here as his characters and backgrounds are really lacking a clean and distinct line.  Finch can definitely draw some great action scenes, but that action looks muddied and rough.  This series hasn’t been the prettiest to look at, but because of Johns’ writing I’ve still been thoroughly entertained.  I’m looking forward to this series concluding next month as Johns has still left one big question still left unanswered.  I can’t wait to see just who’s on the other side of the red skies that has chased the Crime Syndicate to the DC proper earth, and see what Johns has in store for the DC Universe post Forever Evil.

The goal of ComicSpectrum is to provide a one-stop reference for everything about & related to comics and comics culture.
View all posts by comicspectrum →
This entry was posted in DC and tagged comic books, comics, Crime Syndicate, David Finch, DC Comics, Forever Evil, Geoff Johns, Justice League of America. Bookmark the permalink.