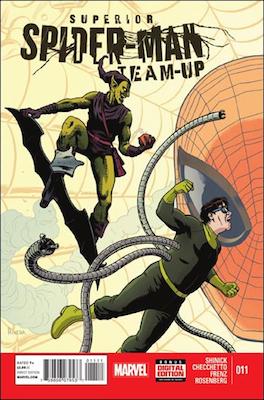 This eleventh issue of Superior Spider-Man Team-Up is my favorite issue of the series so far. Why? Well, artist Ron Frenz and inker Sal Buscema take over the art duties on this issue presenting a flashback tale starring Doctor Octopus and the Green Goblin. I understand that this art may not be for everyone, and for newer readers this art may seem dated, but the art fits the story and it’s such a personal pleasure to see these talents gracing the pages of a Spider-Man title again.

After an opening page by artist Marco Checchetto that takes place in the present day, the story immediately flashes back to a time years ago where Doctor Octopus receives a letter from Norman Osborn who was presumed dead at the time, inviting him to Europe. As the second page flashes back with story, so does the art. Frenz gives us a Norman Osborn that is immediately recognizable as he just looks so evil. Leave it to Frenz to give Osborn an ascot to sell the point even further. Frenz’s art is not photo realistic. It’s stylish and dramatic, while consistently and clearly telling the story. The Green Goblin carries an evil grin or scowl throughout, while Doctor Octopus has his trademark bowl hair cut and glasses. These are the looks that define these characters. They may not have the polish and depth that later artists have given them, but Frenz and Buscema tap into the essence of their trademark styles. Inker Sal Buscema adds to the depth, but allows Frenz’s art to come through. And kudos to colorist Rachelle Rosenberg who absolutely nails the look of this time by coloring the book with a limited color palette. There’s no gradient art in this issue which gives the look that 1980’s feel. She absolutely nails the look that this issue was going for.

As far as the story goes, it’s a fun tale about two of Spider-Man’s most classic villains teaming up while exploring both of their strong yet warped personalities. How do two brilliant minds come together to tackle competing, yet similar goals. Writer Kevin Shinick takes that one step further by throwing the madness of Norman Osborn into the mix, complicating the situation, and their relationship. There’s an interesting bit of history about Doctor Octopus that I didn’t know previously, as well as a great cliffhanger that sets the stage for an even more exciting second part. The whole creative team brings you back to Spider-Man stories from the 80’s and I couldn’t be happier about it. I know this issue may not be for everyone, but for me, I couldn’t ask for anything more.