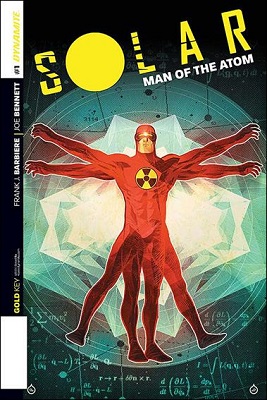 Dynamite has been doing a great job on retooling the old Gold Key comics for modern audiences.  First we got Turok, then Magnus, and now Solar.  They’re building a very solid corner of the Dynamite publishing line with these books.  Solar is another character that I’m far more familiar with from his turn with Valiant in the 1990s than in his original Gold Key incarnation.  These are definitely not the Valiant characters.  I’ve read a couple of the original Gold Key comics which were fairly simplistic 60s stories and I can see the common roots that have been updated both here and very differently by Valiant.

It’s hard for me to not draw the comparisons to Valiant’s take on the character, since it was a favorite of mine.  While this is not a riff on the Valiant take, it’s still a very solid reworking of the core Gold Key concept by writer Frank Barbiere and artist Joe Bennett.  Here Phil Seleski (aka Solar: Man of the Atom) is a scientist working at Atom Valley Industries, which is run by his father Colin Seleski.  In a nice visualization of Solar’s power set, we see various chemical equations as he works his atomic transmutations.  Barbiere is the letterer in addition to writing the book, I assume so that he can have control over getting all those equations down on the page just the way he wants to see them.

There’s a LOT of information coming at us in this issue.  We get an action scene with Solar stopping a bank robbery, the introduction of quite a few of the major players (and a lot of names I recognize, but this is not an essential factor for enjoying the story), and an extremely interesting setup for future issues that could be a major divergence from the character we got from Gold Key, in a good way.  Throughout, Bennett keeps us on track with a very clean and dynamic art style that moves the story along at a good clip in both actions scenes and character development.  If Dynamite can keep creators and stories of this caliber on all their Gold Key books they’ll have me as a customer for the duration.  This relaunch is well worth checking out.

The goal of ComicSpectrum is to provide a one-stop reference for everything about & related to comics and comics culture.
View all posts by comicspectrum →
This entry was posted in Dynamite and tagged Dynamite, Frank Barbiere, Gold Key, Joe Bennett, Man of the Atom, Solar. Bookmark the permalink.