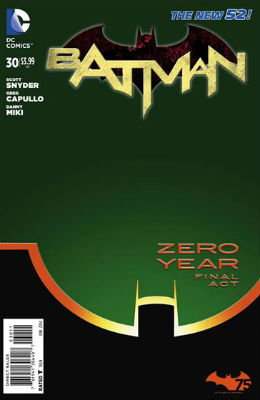 We now approach the final act of ‘Zero Year’ with Batman #30 and true to form; the creative team of Scott Snyder and Greg Capullo manage to pull it off in spectacular fashion. This is where everything finally comes together and right in the middle of it is The Riddler and the looming threat he imposed on Gotham City.

This issue starts off with a dream sequence that doesn’t end well. If the Tokyo Moon scene from the previous arc is any indication, one can surmise that this dream will add some resonance to the upcoming events in this final Zero Year arc. Upon waking, Bruce Wayne finds himself in the care of a familiar face. He gets filled in about the full extent of Riddler’s hold on Gotham City, which is now subject to his whims courtesy of all the deterrents and deathtraps he installed around its borders. The odds stacked against Batman and Gotham City appear to be so unassailable that you can’t help but wonder if Batman can ever figure this one out. Of course, Batman isn’t alone, as long as Batman has Jim Gordon and Alfred for backup you can’t count him out.

Of course, it will never be easy. At this point, Gotham City is a chessboard where The Riddler has all the pieces where he wants them. This makes the intricate and subtle machinations involved in the battle of wits between Batman and The Riddler as exciting as it is a pleasant mental exercise. Scott Snyder perfectly captures the voice of each character amidst the backdrop of threats, encumbrances, and challenges posed by The Riddler. As someone who has never really thought much of The Riddler before now, I’ve been pleasantly surprised how Scott Snyder has turned him into a really credible threat. Snyder’s Riddler has a worldliness, a sense of real – albeit crooked – purpose, and some real depth. What’s more, it was done within the context of the contemporary problems that assail our world today.

And what more can I say about Greg Capullo? The man is an art monster. His detailed pencil work is so distinct, so polished, and has solid storytelling to match. A big part of why this issue resonated so well with me is largely attributed to Greg’s masterful rendering of Gotham as an overgrown and dilapidated city. Combined with FCO’s gorgeous color schemes and Danny Miki’s precise yet dynamic inks, you have what arguably the best art team currently is working in comics.

Scott Snyder and Greg Capullo’s Batman run continues to be one of the brightest spots in the New 52. Despite the countless stories told about the caped crusader, this creative team has managed to deliver a fresh and modern take on the Batman mythos. And whether you like the idea behind Zero Year or not, you have to give Scott Snyder a lot of credit for the sheer boldness in deciding to do a re-imagining of Batman’s origin story, even more so when you consider that it dares to retread the hallowed ground that is Frank Miller’s Year One. And now that we’re in the final act, I am honestly of the opinion that Zero Year is a classic in the making.

The goal of ComicSpectrum is to provide a one-stop reference for everything about & related to comics and comics culture.
View all posts by comicspectrum →
This entry was posted in DC and tagged Batman, comic books, comics, DC Comics, Greg Capullo, Riddler, Scott Snyder, Zero Year. Bookmark the permalink.