Posted on August 8, 2014 by comicspectrum 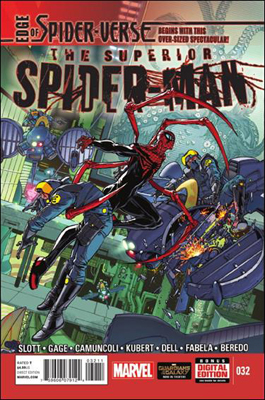 On the face of it, Superior Spider-Man #32 has everything I could hope for and expect in a great comic. Alternate timelines/realities? Yes please! Although it may be played out (especially recently at Marvel), I love stories that explore what could have been. A cadre of alternate reality Spider-Men? Absolutely! I think I even recognized some from old What If? comics I read as a kid. The return of the Superior Spider-Man? Just take my money! I was a huge fan of Doc Ock’s run as everyone’s not-so-friendly neighborhood Spider-Man. Dan Slott and Christos Gage beginning the Edge of Spider-Verse event in an over-sized spectacular? I was already sold, but this was the icing on the cake!

Well, you know what they say about expectations. It was far from a bad beginning to this Spidey event, but overall it was pretty standard fare. As noted on the title page, the story takes place during Superior Spider-Man #19, where Spider-Man disappears for a few hours after a huge temporal implosion. Fear not, I went back to look and it all checks out (though, really, it’s not that important and this issue is completely new reader friendly). Longtime readers may have forgotten Spidey’s disappearing act, but I’m certain writer Dan Slott has had this event long since planned. With so much time to work with, and the extra pages to boot, I really wish there would have been more meat to this issue. There are some quick montages of Spider-Man traversing the multiverse, specific focus on a couple of the alternate Spider-Men, and we are introduced to the villain, whose character design I find uninspired. He just doesn’t have the look of someone as indestructible and dangerous as portrayed this issue. There is a backup story that features an alternate Spider-Man in a fight for his life before being recruited by Spider-Man proper, but other than the artist change, I am left wondering why this was separated out of the main story. Still, there was some fun to this issue and I was delighted to see Doc Ock in the driver’s seat again. In typical fashion, he did little to endear himself to those who crossed his path, even as he did something with a holographic projection that shows he does have a heart somewhere buried deep inside. The art by Giuseppe Camuncoli in the main story and Adam Kubert in the backup story was clean and fun. I judge Spider-Man art by how well the artist twists and turns Spider-Man’s body during aerial acrobatics and both artists played a good game of twister.

This over-sized spectacular could have probably been tightened up and begun the Edge of Spider-Verse event with the same effect. Conversely, the extra pages could have been utilized better and given a bigger bang for the buck. Nevertheless, the groundwork is set and after reading this issue, it should be quite clear for any reader whether or not they want to jump on board for the event. Personally, I cannot wait to see how Peter reacts when he meets up with Doc Ock, which is inevitable, or how Doc Ock will react when he realizes that in the near future, relatively speaking, Peter returns to claim his body.

The goal of ComicSpectrum is to provide a one-stop reference for everything about & related to comics and comics culture.
View all posts by comicspectrum →
This entry was posted in Marvel and tagged Adam Kubert, Christos Gage, Dan Slott, Doctor Octopus, Giuseppe Camuncoli, Marvel, Spider-verse, Superior Spider-Man. Bookmark the permalink.