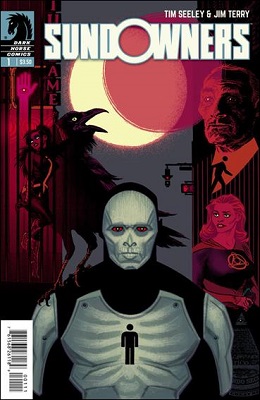 The solicit promised a “dark look at the thin line between heroism and insanity” and issue #1 delivered just that. Not the kind of insanity we usually see in comics, but a slightly more clinical view as four would-be super-heroes participate in a group therapy session with psychologist David Shrejic who is also certain he’s discovered a new psychological disorder “Sundowner Syndrome” – where individuals are compelled to patrol the street after dark as vigilantes.

Through the group we’re introduced to Crowlita (a Go-Go dancer who can see strange shadowy individuals), The Concerned Citizen (a traditional vigilante who is convinced there are “Reptiloids” out there making a move against humanity), Arkanika (a super-hero wannabe who believes she must sin in order to fuel her power reserve to do good to balance it out), and Karl Volf, a 65-year-old who in the past was the vigilante Patient Wolf (or is that all just in his head?)  This is a fascinating group of characters and the 3-page vignettes each recount during group give insights into both their frame of mind as well as dropping breadcrumbs about the possibility that there may actually be something more going on.  Oh, and how will The Pigeon (introduced on the 1st 2 pages of the issue) tie back into all this?

Tim Seeley and Jim Terry are accomplished storytellers and have created a different take on super-heroes here.  It’s not cut-and-dried at this point, the wrap-up to this debut issue certainly sets a stage where something is going on.  There is room for the story to go in several directions next issue, and that makes me want to read issue #2 all the more.  I like being left with a sense of “I wonder where they’re going to go with this?” when I read something new.  If you enjoy comics that take you someplace different tucked around the edges of the super-hero genre, you should check out Sundowners #1.

The goal of ComicSpectrum is to provide a one-stop reference for everything about & related to comics and comics culture.
View all posts by comicspectrum →
This entry was posted in Dark Horse and tagged comic book, comics, Dark Horse, Jim Terry, Sundowners, Tim Seeley. Bookmark the permalink.