Posted on September 23, 2014 by comicspectrum 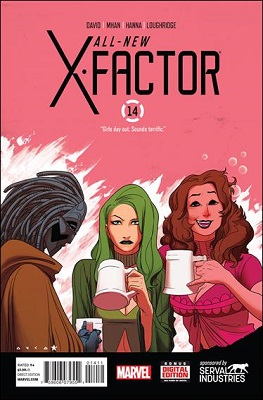 I thought the All-New X-Factor series had a rough start with a somewhat clumsy first story arc. However,  I have enjoyed the story and character development much more for the past 3 issues. The story in this issue was one of the strongest of the series so far but, it still isn’t close to Peter David’s best.  The issue begins with a rather uncomfortable conversation between Polaris and Danger. The humor that Peter David uses in this scene is a bit sophomoric, however, I still found myself enjoying a little light hearted chuckle. The constant references back to the joke was a bit played out by the end of this issue.

Suddenly, a prominent character from the Avengers arrives (albeit very conveniently), and a girls day out ensues. I really am an easy sell for these types of story lines, yet, I felt the one that played out in this issue was a bit mediocre. Some of the dialogue seemed a bit forced and awkward. Also the inciting incident really needed some sort of scene transition to help the story flow better.  Although Peter David created a compelling premise rife with impressive symbolism, the story seemed to lack a bit of heart. It is a case where the story construction got in the way of the story telling. I thought the great dialogue Peter David is somewhat famous for was missing in this issue.

What makes team books great is the team dynamics, and while David has been spending time setting them up, I think he has, up to this point,  failed to really define the characters as well as he did in the previous incarnation of X-Factor.  The art in this issue by Pop Mhan and Scott Hanna was a bit to cartoony for my liking and seemed a bit sparse in places. While the panel to panel story telling was effective, there were no pages that had me devoting time for extra attention or appreciation.

I thought the overall series is moving in the right direction but felt this issue was nowhere near the quality that Peter David has the capacity to produce but had enough good moments to make it enjoyable.  The new team dynamic Peter David has put in place has me really excited to see what is coming next and has spared the title from being cut from my reading list.

The goal of ComicSpectrum is to provide a one-stop reference for everything about & related to comics and comics culture.
View all posts by comicspectrum →
This entry was posted in Marvel and tagged comics, Johnson, Lee Loughridge, Marvel, Peter David, Pop Mhan, Scott Hanna, X-Factor. Bookmark the permalink.