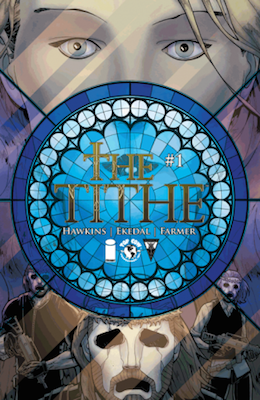 Creator and writer Matt Hawkins along with co-creator and artist Rahsan Ekedal take the old idea of a heist story and set it in the world of religion and the mega-churches that have established themselves all across the country. At times the story can get a bit controversial and I can envision this coming off as offensive to some, but Hawkins and Ekedal treat the story with respect and introduce a main character who’s both realistic, and plays a somewhat neutral role between the strong viewpoints introduced throughout this first issue.

In the opening cover there’s a quote from controversial figure Jim Baker that says, “Giving to our ministry does the Lord’s work”. Underneath that is a sentence that gives a brief history of who he is and how he only served five years of an original forty-five year sentence for financial fraud. The quote serves as not only a historical reference, but also sets the stage for where this story is headed. Hawkins then introduces us to a pastor preaching at a mega church in California right before the tithe is collected. At the same time, a group of robbers wearing Jesus masks are executing their plan to rob the Church and discredit their pastor. Although the tithe collecting scene can come off as a bit forced in its writing, the ensuing heist and subsequent consequences grabbed my attention and never let go until the very end.

Hawkins explains at the end of the story that he’s an atheist which may lead you to believe that there’s a bias to his writing, but he does a great job of showing the alternative viewpoint through FBI agent Dwayne Campbell who’s been assigned to the case. Campbell is a believer and although he’s questioned by his atheist partner Jimmy, he believes in his faith and the idea that the mistakes of the individual shouldn’t damn the majority. As Campbell and Jimmy investigate the group behind the robbery, they find that the mastermind is a modern day Robin Hood which makes the whole situation that much more complex.  The art by Ekedal is a great fit for the realistic settings and characters, and I feel as though the art got better as it went along.

I haven’t always been a fan of the books and stories that Top Cow have chosen to tell, but I was pleasantly surprised at just how much I enjoyed this issue and the controversial topics it introduces. Although it may run the risk of offending some, the creative team does a great job of balancing both sides of the issue by writing a strong main character who I’m looking forward to reading more about. I’ve read a lot of comics this week and this first issue stood out the amongst the pack!

The goal of ComicSpectrum is to provide a one-stop reference for everything about & related to comics and comics culture.
View all posts by comicspectrum →
This entry was posted in Image and tagged comic books, comics, Image, Matt Hawkins, Rahsan Ekedal, The Tithe, Top Cow. Bookmark the permalink.