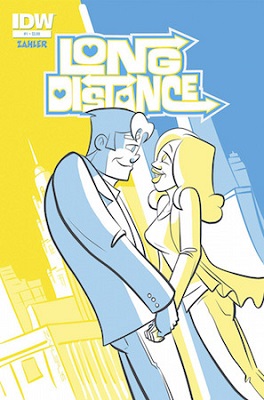 Thomas Zahler is back in the romance comics game this month (after his wonderful super-hero romantic comedy Love & Capes) and this extra long debut issue was a breath of fresh air in my comics reading.  People who know me know that I “love the different”.  I read a lot of comics and I like ones that stand out from the crowd.  That describes Long Distance perfectly, it stands out from everything else I’m reading and is a charming romantic drama chronicling (so far) the very beginning of a budding romance beween a couple who meet in a New York airport during a weather delay but who live a bit of a distance apart in Chicago, IL and Columbus, OH.

Zahler is handling it all on this series, art, writing. coloring, lettering.  It features his signature style that is simple, but not simplistic.  I like the economy of linework he uses to convey the story that still packs a powerful emotional punch.  I’ve never been in a long distance relationship, which adds tremendous complexity to a budding romance, but I dated and fell in love and Zahler perfectly captures the early dating dance that we all go through.  Phone calls are augmented by Twitter in this day & age (something I personally didn’t deal with when I was dating) and I really enjoyed the Tweets sprinkled around the story.

This is a story told in 3 colors.  It’s essentially a black and white book, but an additional color is used to accentuate the location.  Chicago is brown, Columbus is green, the scenes with Carter and Lee together in the New York Airport are purple.  The color added a subtle additional factor for me that I thought was impactful as I read the story.

This 44 page 1st issue was well worth the $4.99 price tag.  The amount of story packed into this issue brought me far enough along into the story that I really got a sense of the personalities of Carter Blue and Lee Smith and exactly what is attracting them to one another.  This is planned as a 4 issue series so it will run its course soon enough.  I’m pulling for these two, I hope the relationship is successful and doesn’t crash and burn as long distance relationships often do.  That’s the thing, though.  Zahler made me CARE about these characters over the course of this issue, which to me is a sign of his success as a storyteller with this issue.  I look forward to watching the relationship play out.  Carter and Lee…I have my fingers crossed for you!  Good Luck!

The goal of ComicSpectrum is to provide a one-stop reference for everything about & related to comics and comics culture.
View all posts by comicspectrum →
This entry was posted in IDW and tagged comics, idw, Long Distance, Romance, Thom Zahler. Bookmark the permalink.