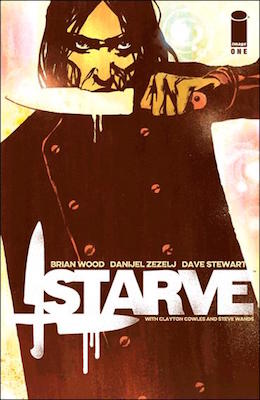 Rating: 4/5 – Brian Wood’s Take on Reality TV in a World Ruled by the 0.1%.
by ComicSpectrum senior reviewer Shawn Hoklas.

Starve is a multi-layered story that looks to touch on the separation of the haves and have-nots in an overpopulated society, family issues, and a conflicted main character who previously starred on the most popular television show in the county called “Starve”. It’s the latest creator owned series written by Brian Wood who’s had plenty of successful series in the past such as DMZ, The Massive and Dark Horse’s current series Rebels. Although like “The Massive” in that Starve deals with a future that seems both dark and depressing, at the center of the tale is a conflicted man’s struggle to deal with a multitude of problems that he seems to have ran away from, and are all now catching up to him.

When we first meet main character Gavin Cruikshank he’s getting drunk and eating street vendor foods somewhere in an overpopulated southeast Asian city. It’s here that Brian Wood first starts to show just how complex Gavin is. In one caption box he’s talking about his current lifestyle that’s carefree and relaxed, while in another he’s discussing the complexity of a moo ping food dish. Gavin’s narration is used throughout this first issue, letting the reader know how he thinks and feels. After awaking the next morning, the network that hosts his show finds him and lures him back to the states to finish out the remainder of his contract. It’s at this point we start to see just what types of issues Gavin left behind and the world he’s forced to come back to.

Artist Danijel Zezelj lines are heavy. There’s a lot of blacks in this book which add even more shadows to the dark and gloomy future. The opening scene in Asia feels claustrophobic as Zezelj uses those shadows and blacks to show just how everything is stacked upon itself, and every bit of free space is used up and occupied. That same level of darkness is used in Gavin’s facial features. Thick black lines show the crevices in Gavin’s face, giving you the sense that he’s just as worn out as the city he resides in. At times other character faces can look strange due to the exaggerated blacks under the eyes and mouth, but not so much that it distracts you. Dave Stewart nails the colors which shouldn’t be any surprise. There’s not a bright color in the book. Even the lights on the set of Starve have an eerily muted yellow tone to them, adding a sickly feel to a show that takes a strange turn at the end.

Starve is about so much more than a cooking show. There are many layers to the story and Wood is slowly peeling them back to show its complexity. I’m intrigued by this series and hope that Wood explores just as much of this world’s past as he will the present. Gavin Cruikshank isn’t the most like-able of characters, but he’s interesting and complex much like the world around him. I’ll be back to see where this story goes next, as Brian Wood and Danijel Zezelj have whet my appetite for more of Starve.

The goal of ComicSpectrum is to provide a one-stop reference for everything about & related to comics and comics culture.
View all posts by comicspectrum →
This entry was posted in Image and tagged Brian Wood, comic books, comics, Danijel Zezelj, Dave Stewart, Image, Starve. Bookmark the permalink.