Posted on September 21, 2015 by comicspectrum 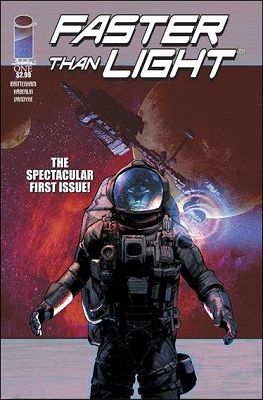 I liked the idea and liked the issue in general, but there was something still nagging at me when I finished the issue.  I just didn’t have a feeling that I had just gotten a satisfying chunk of story out of it.  Sure, it was establishing a new universe, characters, rules, etc.  But I’ve read a lot of comics that do that in a #1 issue and leave me feeling satisfied with what I had just read.  Craving more, certainly, but feeling like I had gotten a nice self-contained unit of storytelling from the single issue.

For me, that’s where the whole concept of “reading better in the trade” comes from.  Whether the writer is consciously “writing for the trade” or not isn’t the real issue, it is whether I got a solid feeling of a generally self contained unit of story that I was satisfied with.  If it makes me want to come back for more that’s even better!  I love the idea here.  Faster Than Light travel has been discovered.  Whole new horizons are opening for the human race.  From the blurb on the back cover, I know that scientist Saul Fredericks didn’t really come up with FTL travel.  He deciphered a message from outer space that held the key and seems to be taking credit for it with the general population.

I also learned from the back cover that the message from space also told us to use that knowledge to flee our world because “They are coming”. DAMN!  That’s compelling!  And not a piece of data I got explicitly anywhere INSIDE the issue.  I’m sure writer/artist Brian Haberlin will get to weaving the story around this more in upcoming issues, but it’s a key point that I think would have been nice to hit on explicitly within the debut issue in something other than a back cover blurb.  In the long term, it won’t matter a bit.  The story will move on, the data will all link up, and it will exist in a more complete form that will persist beyond the transitory monthly issues; the Collected Edition.

The characters introduced here didn’t really grab me, but they have potential.  The story itself has loads of potential that I’m betting will pay off down the line.  Reading the back cover of this issue did more for adding it to my pull list than the story inside, there’s maybe something a bit off about that.  Ultimately, I want to know what happens next.  I want to see the story promised by the back cover come to fruition.  I didn’t see that come to life in this debut issue, but I’m sure it will pay off in the first volume, thus my thought that this may read better in collected format.  For my own part, I’ll continue with buying singles (because that’s how I roll), but I’ll be stockpiling the issues of this series and read them in a row when the 1st story arc concludes.

The goal of ComicSpectrum is to provide a one-stop reference for everything about & related to comics and comics culture.
View all posts by comicspectrum →
This entry was posted in Image. Bookmark the permalink.