Posted on September 20, 2015 by comicspectrum 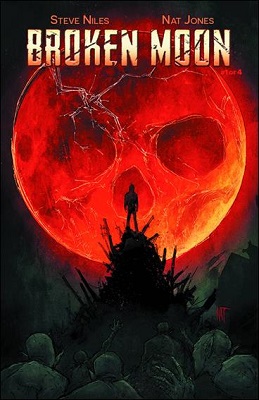 Rating: 4/5 – Post-Apocalyptic Horror Off to a Good Start.
by ComicSpectrum EiC Bob Bretall

The Moon was colonized.  Then a fight broke out.  BROKE being the operative word, a war on the moon physically shattered it, which played havoc with tides and climate on Earth.  Just an excuse for the monsters to come out, really.  Vampires.  Werewolves.  You get the picture.  That’s the setup.  The action takes place 30 years later.

Created by Philip Kim, this debut issue is written by accomplished horror scribe Steve Niles with some dark and moody color art by Nat Jones.  The art sold me on this one.  I’ve been a fan of Jones’ work in the past on titles like Frank Frazetta’s Death Dealer and the various ’68 zombie series that have come out from Image, and his art here really sets the perfect tone for the series.  It feels like it’s set at night.  Dark, but not too dark.

This issue sets the stage and moves us just a little bit into the story.  The Vampires want to ensure they have a steady food supply, and that means farming humans.  Humans who don’t take kindly to being farmed, so we have the “plucky band of rebels fighting the overlords” trope.  Werewolves are in the mix too, but we’ve not yet seen the full extent of the role they’ll play in our drama.  This is a great comic for people who “like this sort of thing”, and I count myself among that number.  I’m looking forward to seeing the story play out and I hope people will give American Gothic Press a try, it certainly seems to be the kind of comic that you’re going to need to ask most comic shops to carry, and is worth asking for if you’re a fan of the genre.

The goal of ComicSpectrum is to provide a one-stop reference for everything about & related to comics and comics culture.
View all posts by comicspectrum →
This entry was posted in American Gothic Press and tagged American Gothic Press, comics, horror, Nat Jones, Steve Niles, vampires, werewolves. Bookmark the permalink.