Posted on September 26, 2015 by comicspectrum 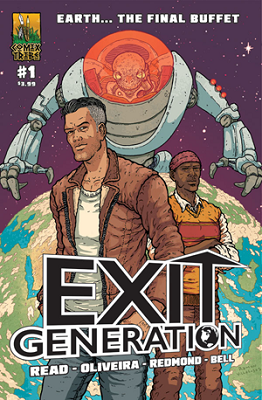 Rating: 3/5 – What Happens After 95% of Earth’s Population Leaves?
by ComicSpectrum EiC Bob Bretall

It’s 2025 and Earth has exhausted its ability to support an ever growing population.  The Solution? ExIT (Extraction by Interstellar Transport).  Huge space arcs are built and 95% of the Earth’s population choose to leave the planet and go off into the great unknown.

Writer Sam Read includes a potentially unintentional fantasy element in the story; the United Nations is actually able to agree upon the ExIT program and then build the space arks over the course of 10 years (but that’s the cynic in me talking).  There is also no mention of them having a specific destination in mind capable of supporting the majority of Earth’s population.  Nor is there any detail about why 95% of the population needs to lead onto the arks, as opposed to 50% or 75% or anything else.  There’s a food shortage, but nothing mentioned about the Earth being uninhabitable if the population is brought under control.  These are pretty big plot holes and ultimately the ExIT program is a storytelling device to get the majority of the population off the planet so a story can be told with the remaining 5%.

Jump to 2055 where the majority of our story will be set.  What could have been a really cool reveal at the end of the issue is spoiled by overzealous marketing putting the tag-line “Earth…The Final Buffet” (at least I hope it was marketing and not Read spoiling his own reveal).  The art by Caio Oliveira was OK, but it lacked the fine detail to really make me love it.  One example from page 3 panel 1 is that foreground figures lack facial details (noses, eyebrows).  Many other panels either lack all background detail, or it’s very sketchy.  A stylistic choice, and one that didn’t really get me fully into feeling the story.

Ultimately, there’s an interesting idea built into the tag-line “Earth…The Final Buffet”, but readers will need to wait until future issues to see it realized.  A lot of this issue was set-up to allow us to get to the arrival of the more “in your face” arrival of the alien race that is an analog to the Kanamits from the classic “To Serve Man” episode of Twilight Zone.  They’re not trying to deceive anyone for more than a few minutes, but at least we get some great dialog filled with food-related terms when the lead alien initiates first contact with the humans.  For me, this is a story that will likely read better in collected edition format so the meat of the story (pun not intended, though it’s an appropriate one) doesn’t seem so out of balance with the set up.

The goal of ComicSpectrum is to provide a one-stop reference for everything about & related to comics and comics culture.
View all posts by comicspectrum →
This entry was posted in ComixTribe and tagged alien invasion, comic, Comix Tribe, Exit Generation, Sci-Fi, To Serve Man. Bookmark the permalink.