Posted on November 22, 2015 by comicspectrum 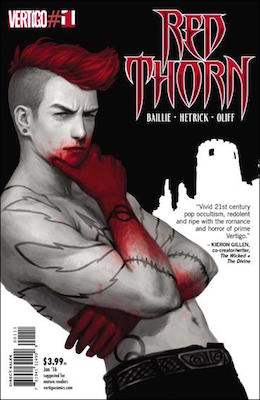 Vertigo is in the midst of a sort of rebirth with a bunch of new titles like Unfollow, Clean Room (both reviewed on ComicSpectrum) and their latest release Red Thorn. This is another strong debut with a story that hooked me without providing all the answers, as well as showcasing some beautiful art by Meghan Hetrick. Red Thorn does so many things right and never gets too confusing or complicated with its deep storyline and layered plot. Red Thorn may be best described as horror fantasy, but it’d be tough to limit it to just that.

Writer David Baillie tells the tale of Isla Mackintosh and the search for her sister who died before she was born. This search takes place in Glasgow, which plays a role in the book all itself. As Isla searches and falls in love we also see that she has the power to bring things to life from her drawings, which includes ties to a mysterious stranger covered in tattoos who seems to be someone important to the overall story, but Baillie doesn’t tell us how just yet. Instead he chooses to focus on Isla, allowing us to enjoy her as a main character of this series before revealing too much.

Meghan Hetrick’s art and portrayal of Isla adds to her being such an endearing character. She’s drawn beautifully but realistically. Her red hair makes her stand out on the page and the designs of the characters are original and striking, though like the story, we don’t see them too much. My only complaint is that at times the colors were a bit too deep, standing out too much when they didn’t necessarily need to.  That’s a small complaint in an otherwise strong premiere.  Vertigo continues to produce some fantastic comics and based on their upcoming releases I’m looking forward to more, they’re not done yet!

The goal of ComicSpectrum is to provide a one-stop reference for everything about & related to comics and comics culture.
View all posts by comicspectrum →
This entry was posted in DC, Vertigo and tagged comics, David Baillie, Fantasy, horror, Meghan Hetrick, Vertigo. Bookmark the permalink.