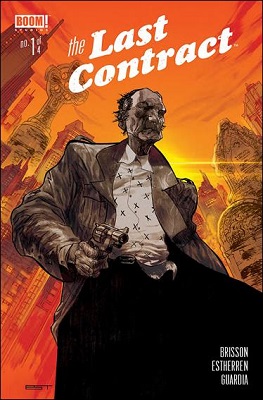 Rating: 4/5 – He’s Old, Not Out!
by ComicSpectrum EiC Bob Bretall

The Last Contract is the latest entry in the “retired hit man tries to retire but someone comes after him and ultimately regrets it” genre.  I could also call this the “some people never learned it’s best to let sleeping dogs lie” genre.  In movies, the role of the hit man is often played by an actor (like Bruce Willis or Keanu Reeves) who can still do all the action and are only “old” to the teens and 20-somethings in the audience.

Writer Ed Brisson give us a genuinely old “old guy” who has been out of the ‘business’ for 20 years and is a grandfather and certified senior citizen.  But he’s old, not dead and messing with a guy who reminisces about the old days with things like “used to be, I’d have to cut off a biker’s arm before he’d say boo to me.  One bastard, shot him ten times and he still didn’t go down…”   Well, you get the idea, this guy is not stranger to violence, and as the mob boss who sent the hit squad after him, you mess with this old guy at your own peril.  We learn the reason why he’s a target, but, as is usual for the genre, it’s inaccurate and they really should have left our man alone.  Where these stories get interested in in the solving of the real reason behind the motivation to make the decision to mess with our protagonist.  And he starts pulling on that thread, showing that he’s still pretty much a bad ass after all those years of retirement.  Artist Lisandro Estherren does a very noirish job augmented by Niko Guardia’s moody color pallet both help set a great tone for this thriller.

The Last Contract was a fairly typical entry in the “contract killer is forced out of retirement” but Ed Brisson put enough unique elements into the story to keep me interested and guessing, including setting the tale in Canada.  These stories are often set in New York.  This was a solid debut issue and got me hooked, so I’m going to go along on the ride to see how the story plays out in this 4 issue mini series.

The goal of ComicSpectrum is to provide a one-stop reference for everything about & related to comics and comics culture.
View all posts by comicspectrum →
This entry was posted in Boom! and tagged Boom!, Canada, Ed Brisson, guns, Hit Man, Last Contract, violence. Bookmark the permalink.