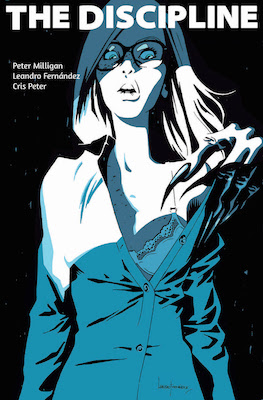 It was way back in July of 2013 when The Discipline was first announced. It was in an announcement that was big because of the return of Sandman by Gaiman and J.H. Williams, but also as a launch of five other titles such as Hinterkind, Dead Boy Detectives and Suiciders, all which have already come and gone. In 2014 The Discipline creators announced that they were working on another Vertigo mini-series titled The Names, which would push back The Discipline’s release. Now three years later The Discipline is out and instead of Vertigo, it’s now being published by Image.

According to writer Peter Milligan, Vertigo had decided to not publish the work so he brought it over to Image and we’re finally able to read this long delayed project. For the most part, the wait was worth it. I enjoyed The Discipline quite a bit, even though there’s still plenty of story still left to be revealed. The Discipline revolves around main character Melissa who’s looking for more in her life, specifically in the area of love and lust. She has a husband who ignores her and a family who she doesn’t connect with anymore. Along comes Orlando who’s able to pique her interest in all things lustful, which turns out to include monsters, sexual violence, and the occult. The Discipline seems to be some type of organization, but we still don’t know for sure.  Leandro Fernandez’ artwork added to my overall enjoyment of the story where the lack of answers may have turned me off. I really enjoyed Fernandez’ smooth line and the way he can exaggerate the details in a way that never makes the story seem goofy. The monsters are nicely designed and there’s a great scene involving a Da-Vinci-like Vitruvian Man that was especially cool and frightening. Melissa’s character design is also superb and her style, including her hair and clothing or lack thereof changes throughout the issue without ever becoming confusing, which I appreciate.

The goal of ComicSpectrum is to provide a one-stop reference for everything about & related to comics and comics culture.
View all posts by comicspectrum →
This entry was posted in Image, Image Comics and tagged comic books, comics, Image, Leandro Fernandez, Peter Milligan, The Discipline. Bookmark the permalink.