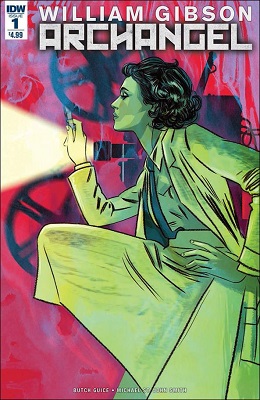 I’m a long time fan of sci-fi, alternate history, time travel, and WW II stories, so when you put them all together, co-created and scripted by William Gibson (whose Neuromancer pretty much created the cyberpunk sub-genre of sci-fi), I’m all in.  I’ve been looking forward to reading this ever since I first saw it solicited and pre-ordered it a few months ago.

Gibson describes the story, aptly, as “Band of Brothers vs. Blackwater”.  Along with Michael St. John Smith, Gibson has created a world where the powerful and corrupt can use a device called The Splitter to travel back in time to 1945 and split off an alternate timeline to create a better present day reality for themselves to transition over to.  This leverages the time travel theory that you cannot really alter your present but instead you will create an alternate timeline if you change the past.  I like this because it’s the first time I’ve read a story where the plot hinges on purposely splitting off an alternate timeline, I assume to colonize with people from the ‘prime’ timeline of the story.  I won’t go into the specific details, that would only ruin the story for you if this sounds interesting, but you can probably guess that the ‘good guys’ send some people back to try to stop the 1st set of travelers who are setting out to co-opt an entire timeline for their own nefarious ends.

The art, by Butch Guice with inks by Guice and Tom Palmer, and colors by Diego Rodriguez, is top notch.  If you’ve read comics for any length of time you have probably run across Guice’s work somewhere along the way.  His work has been see in Micronauts, New Mutants, X-Factor, The Flash, Doctor Strange, Badger, Iron Man, Resurrection Man, Birds of Prey, Action Comics, and Ruse, to name but a few.  I love his character design, panel composition, background work, the whole artistic package.  We get to see some character design sketchbook pages in the back of the issue, as well as some process pages with progressions from pencils to inks to color, I love to see these behind the scenes elements that show the process that went into making the comic.

If you’re a fan of time-travel and alternate histories, be sure to check out Archangel.  This was an excellent 1st issue that established the world, several key characters who all felt adequately fleshed out, as well as the basic premise of the story.  There’s certainly more to come…for instance what exactly IS this ‘Archangel’ that they’re setting up.  I have guesses and speculation, but time will tell as the story unfolds.  The only detriment to this comic was the price: $4.99 for 20 pages of story, though it is printed on nice paper with cardstock covers and has an additional 18 pages of backmatter (an essay by Gibson, as well as character design & process pages).  If you’re scared away by the cover price, keep an eye out for the eventual collected edition.  That may prove to be a more economical way to get your hands on the story.  For my own part, I’m in it for the monthly read.  I love seeing these stories play out as serialized fiction, especially when handled by a writer like Gibson who knows how to pack a satisfying chunk of story into the issue.

The goal of ComicSpectrum is to provide a one-stop reference for everything about & related to comics and comics culture.
View all posts by comicspectrum →
This entry was posted in IDW and tagged Alternate History, Archangel, Butch Guice, comics, idw, Sci-Fi, time travel, William Gibson, WWII. Bookmark the permalink.