Posted on September 25, 2016 by comicspectrum 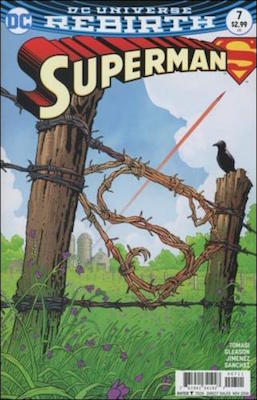 It would be tough for me to pick my favorite of the DC Rebirth titles, but If I had to, Superman would be in the running, if not my actual favorite. Admittedly, I wasn’t a fan of the New 52 interpretation of the character and was thrilled when they brought back this Superman in DC’s Convergence event. Since then, I’ve been even more thrilled with the way he’s been handled and his role as not only a hero, but a father. Now that the first arc is over, Superman number seven takes a look at a day in the life of the most powerful man in the world spending some down time with his family.

Writers Peter J. Tomasi and Patrick Gleason have really made Clark, Lois, and son Jon such likable characters.  As soon as a three page opening that shows Superman helping out individual Justice League team members wraps up, the family heads out to the local county fair. There’s no major villains, no threats that could potentially destroy the earth, and no heavy dramatics between characters. It’s an “off” issue that shows just how well Superman works with a son. It absolutely defies the somewhat misguided belief that these iconic characters like Superman or Spider-Man can’t “grow up”. Where the New 52 Superman was de-aged, this one embraces an older Clark’s journey and the changes that go along with it, and shows why his family can add just as much potential for powerful storytelling.

The art is just as strong and the combination of Patrick Gleason and Jorge Jimenez have been a great one-two punch on this series. Jimenez takes the lead in this issue and makes the most of this quiet tale. I especially love his drawing of young Jon as he looks the age he should, and adds so much character by infusing plenty of personality into his facial expressions. This issue was such a joy to read and despite having no typical super-heroics, was maybe the best issue in what I feel is one of DC’s best series.

The goal of ComicSpectrum is to provide a one-stop reference for everything about & related to comics and comics culture.
View all posts by comicspectrum →
This entry was posted in DC and tagged comic books, comics, DC Comics, Jorge Jimenez, Patrick Gleason, Peter J. Tomasi., Superman. Bookmark the permalink.