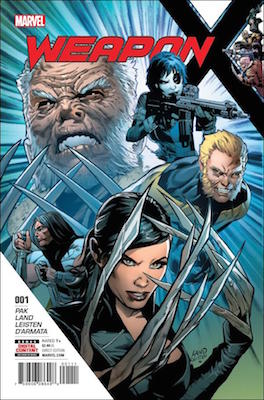 Although Wolverine has been dead for a while now, Old Man Logan has filled those shoes nicely, appearing all over the Marvel Universe, starring in his own title, and now in this spinoff titled, Weapon X. On the credits page, we’re told this team will consist of Old Man Logan, Domino, Sabretooth, Lady Deathstrike, and Warpath. It’s definitely a team that’s reminiscent of the teams found in Marvel’s previous X-Force books, which was a darker and arguably more violent version of the main X-Men team. While I feel this team has potential (excluding Sabretooth which I’ll explain in a bit), this first issue failed to get me excited for what’s ahead.

Weapon X has a long history in the Marvel Universe of creating both notorious killers and heroes, with Wolverine being the most famous. This issue opens up with a scene that nods its head to the famous Origin cover with Logan squatting by the side of a river.  He eventually comes into contact with two killers who have similar features to those of Wolverine’s, including adamantium covered claws. After the fight doesn’t go well, Logan needs assistance in striking back and searches out Sabretooth for help. It’s here where the story loses me. I know after the AXIS storyline Sabretooth was “inverted”, but the fact that Wolverine would still go to him considering their long and violent history seemed out of character to me.

The art by Greg Land is solid, although I know he has his share of critics. The colors by Frank D’Armata really shine though as this is a bright book compared to what we’ve seen in the previous X-Force books and even the short lived Weapon X series from the early 2000s. The opening sequence in particular stands out with it’s picturesque setting and bright sun. As a side note, I love the team profile integrated into the upper right side of the title on the cover . It’s reminiscent of Marvel’s characters in the upper left corner price box from years ago.

In previous reviews I’ve also talked about Marvel’s consistent plot point to turn its most popular villains into heroes; Venom, Magneto, and Dr. Doom just to name a few.  To me it always lessens the character’s appeal. Sabretooth being good just feels wrong. Pak’s writing is fine despite this most likely being the first part of what seems to be a “recruiting the team” type story, it just wasn’t all that exciting and some of the quieter moments of the book, like Wolverine researching at a library, seemed out of place. I usually love Pak’s writing so I’m confident this series will be strong even if this first issue missed the mark for me. I’ll definitely be around for the rest of this first storyline at the very least.

The goal of ComicSpectrum is to provide a one-stop reference for everything about & related to comics and comics culture.
View all posts by comicspectrum →
This entry was posted in Marvel and tagged Greg Land, Greg Pak, Marvel, Old Man Logan, Weapon X, Wolverine. Bookmark the permalink.