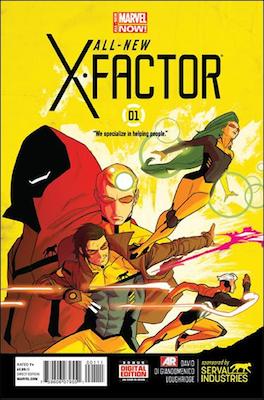 I’ve always been a fan of Peter David and although I’ve been a big fan of his X-Factor runs, I didn’t keep up with the most current series that ended in late 2013.  So I was looking forward to seeing an “All New” X-Factor series being launched with Peter still at the helm.  Although the characters and settings are different, the writing is just as strong and gives us a first issue that opens up a lot of storytelling possibilities.

Instead of using the Madrox’s Private Investigation setting from the previous X-Factor series, this time the setting and scale is much bigger as X-Factor becomes a corporate super hero team.  Serval Industries is a cross between Stark Industries and Google, and it’s wanting to use it’s vast resources to “do what’s best for humanity”.  In that quest, Serval and their CEO Harrison Snow have tasked team leader Polaris to recruit Gambit to join the team, who along with Quicksilver embark on their first mission to investigate a rogue biologist who’s researching mutants.  There’s already tension between the three of them and there’s still more characters to come, as you can see by the cover.  David does a great job setting this issue up, but does reference a bit of each character’s most recent past which I unfortunately didn’t know about, having not read all the recent books with these characters in them.  In no way do you need to know about these references to enjoy this issue, but there were quite a few of these scattered throughout the issue that had me feeling a little lost.

The art by Carmine Di Giandomenico in this issue works, and he’ seems able to handle what will be a larger cast of characters.  Although his characters never look “pretty”, they are distinguishable.  Polaris is a leader not only in name, but in her stature, while Gambit and Quicksilver are easily recognizable not only by their obvious facial features, but in their poses and action sequences.  The art inside is different from the clean lines of the cover art, but it works and I’m looking forward to seeing more.

Overall this is a solid first issue where we’ll get to see David write not only some great super hero dramatics, but also explore how Serval Industries will fit into the larger Marvel Universe.  Peter David’s writing has always been consistently good, it looks as though he’s done it again.

The goal of ComicSpectrum is to provide a one-stop reference for everything about & related to comics and comics culture.
View all posts by comicspectrum →
This entry was posted in Marvel and tagged All New X-Factor, Carmine Di Giandomenico, comic books, comics, Gambit, Marvel, Marvel Now, Peter David, Polaris, X-Factor. Bookmark the permalink.