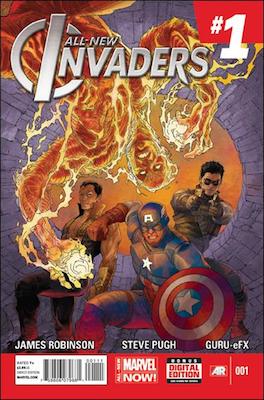 Since James Robinson left DC (rather abruptly) after ending his run on the series Earth 2, I’ve been waiting to see where he would eventually end up.  That wait is over as together with artist Steve Pugh they’ve relaunched Marvel’s World War II team The Invaders in current day Marvel continuity.  In All-New Invaders number one, Robinson attempts to re-introduce us to a team that hasn’t always had the same success as other super-hero teams like the Avengers, or even the Defenders.  Although there are some bright spots and story potential, overall I was hoping for a bit more.  In an interview with CBR titled “Robinson Explains Why You Need to Read All-New Invaders the Week it Comes Out”  he states:

I believe as a writer, though, you should always try and write the best book you can so that readers are like, “I cannot wait for the trade of this book. I’ve got to read it the week it comes out.” I’m trying to make “All-New Invaders” into that book where you can’t wait to read it.

Robinson needs to keep on trying.  He didn’t quite get there with #1.

Starting with the good, Steve Pugh really delivers on the art.  The heroes of the story look larger than life and there are some great splash pages and flashback pages where Pugh is showing off his art style to great advantage.  Although at times his faces can look a bit stiff and have similar expressions from one character to another, he delivers on the action scenes and his characters feel like they’re in motion.  The coloring by Guru eFX is a bit mixed.  The flashback scenes have a “not quite” black and white tone to them that absolutely works for the story, but some of the present day scenes come off as plain and a bit bland.  Having Pugh on this book is exciting for Marvel and I’m hoping he’ll stay on this book for a while.

In regards to the story, that’s where the book didn’t really didn’t live up to my expectations.  The story focuses around Golden Age Marvel character Jim Hammond, the original Human Torch, as he attempts to live a normal and quiet life as a mechanic.

Hammond is attacked by a Kree warrior (who shares a strong resemblance to DC’s Big Barda) who is looking for information leading to a seemingly very powerful device that has been split into multiple pieces.  There is a fight & some flashbacks, Cap & Bucky (Winter Soldier) show up on the final page.

So far this was a Jim Hammond story.  That’d be fine, but Hammond comes off as dull and the dialogue throughout the issue seems a bit overdramatic.  I’ve liked what Robinson has done in the past so I’ll give him the benefit of the doubt and follow this series at least through the first storyline.  This is a comic that seems to have fallen prey to “first issue syndrome” and will likely read better when collected into a trade paperback.  As the rest of the Invaders take on a bigger role within the story in future issues, I’m hoping Robinson’s writing lives up to my high expectations of this series.

The goal of ComicSpectrum is to provide a one-stop reference for everything about & related to comics and comics culture.
View all posts by comicspectrum →
This entry was posted in Marvel and tagged All-New Invaders, Captain America, comic books, comics, Human Torch, Invaders, James Robinson, Marvel, Marvel Now, Namor, Steve Pugh. Bookmark the permalink.