Posted on December 7, 2015 by comicspectrum 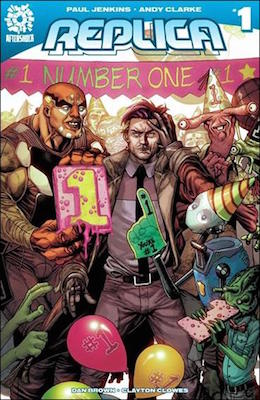 Launched earlier this year in April, Aftershock Comics describes itself as a “comic book company that combines the creative edge of an independent publisher with the strengths and experience of a traditional powerhouse” and they have plenty of talent to make a big name for themselves. With both some some Hollywood and comic book people behind the scenes like Mike Marts as Editor-in-Chief and HBO television show producer Lee Kramer as the current President, Aftershock seems to have the business smarts to make this new comic book company successful. Then there’s the talent that includes names like Brian Azzarello, Garth Ennis, Juan Doe and Replica’s Paul Jenkins and Andy Clarke.

Replica is the first book out for Aftershock and I really enjoyed it! Detective Trevor Churchill works inside the jam packed space station known as the Transfer. The transfer is home to a million different species, ten-billion lifeforms and it’s Trevor’s job to keep the order. He does so with partner Lieutenant Vorgas, who isn’t the brightest bulb in the box as well as a bunch of other officers who all have difficulty communicating with one another because of the differences in species/language (no magical ‘universal translators’ here). Those differences add a wonderful dose of humor to the book, smartly balancing Replica’s healthy amount of action.

As Trevor becomes more and more busy keeping the Transfer safe, he sees an advertisement to create an “identi-buddy” (clone) and decides to make his life just a bit easier. It’s here where the book gets its name. I was enjoying this book without the idea of Trevor’s clones running around, but this added another layer to the story that was just as strong as the rest of the book. Andy Clarke’s art was great throughout, and somewhat cleaner than his art in the past. His small detail lines are subdued, and the coloring by Marcelo Maiolo makes the world of the Transfer come to life.

If Replica is any indication of what to expect from Aftershock, then I’m excited about their future. This is a great first issue that not only shows the type of talent working for the company, but also shows the quality in their production. With Replica you can be on the ground floor of not only a brand new series, but also a brand new publisher.  For me this made Replica #1 an issue I didn’t want to miss!

The goal of ComicSpectrum is to provide a one-stop reference for everything about & related to comics and comics culture.
View all posts by comicspectrum →
This entry was posted in Aftershock and tagged Aftershock, Andy Clarke, comic books, comics, Marcelo Maiolo, Paul Jenkins, Replica. Bookmark the permalink.