Posted on August 3, 2016 by comicspectrum 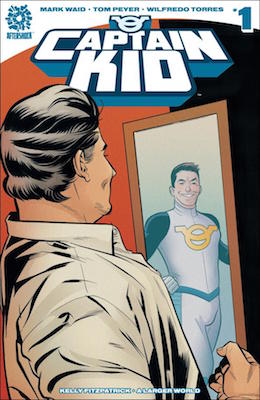 Bob and I have read and reviewed quite a bit of Aftershock’s releases and we’ve enjoyed almost all of them. Aftershock launched just last year and they’ve had some wonderful titles like SuperZero, Replica and more. Even though I didn’t love American Monster, I recognized it for the quality of it’s craft. When Captain Kid was announced, a new series by writers Mark Waid and Tom Peyer, with art by Wilfredo Torres, it was an obvious must buy for me. I really respect all three of its creators and Mark Waid is one of my favorite writers in comics. Unfortunately after reading this, it’s probably my least favorite of Aftershock’s debuts.

On art, Wilfredo Torres has a soft and clean line and although he doesn’t add too much detail, that choice adds to the overall look of the book. This is a bright and colorful book with colors by Kelly Fitzpatrick that make Torres’ art even cleaner. Captain Kid’s look and style is similar to a Legion team member which is great, and the supporting cast all stand out with grounded body shapes and faces. Regrettably, Waid’s writing on this book just didn’t click with me.

Chris Vargas is celebrating his forty-fifth birthday in a bar when we first meet him. The bar is mostly empty except for his two close friends and through their dialogue, Chris isn’t having the best year. After some weird character interactions within that same bar, Chris leaves and in an opposite Shazam-like fashion, transforms into the younger Captain Kid. There are some really funny moments, but not enough to offset the feeling of the whole story being disjointed. For example, Chris sees the villain of the book in the same bar playing pinball and is warned of his potential danger by another female hero who has a gun that can force Chris to urinate, which leads to the two having an important conversation that drives the rest of the story.  But overall, the character interactions, dialogue and jumps in time throughout this book miss the mark for me. At times the dialogue felt jarring and out of place and although I know it’s purposely done in order to create some mystery, it didn’t make for smooth reading.

With more time, I’m confident that Waid and Peyer will tie everything together and have it all make sense.  But I just didn’t like the characters enough to offset the odd choices in storytelling and don’t want to wait it out until things start to gel for me. I won’t be back for the next issue which is sad since I usually enjoy this creative team.

The goal of ComicSpectrum is to provide a one-stop reference for everything about & related to comics and comics culture.
View all posts by comicspectrum →
This entry was posted in Aftershock and tagged Aftershock Comics, Captain Kid, comic books, comics, Mark Waid, Tom Peyer, Wilfredo Torres. Bookmark the permalink.